Josh Earl acknowledged that conceding three goals at home isn’t good enough for North End’s standards, but felt there were positives that the Lilywhites can take from the game ahead of this next run of fixtures.

The 19-year-old came back into the starting XI as a left wing back this afternoon in a formation change which saw Alex Neil opt for a 3-4-3 formation, and Josh felt the formation worked well at times as the hosts created plenty of chances during the game. 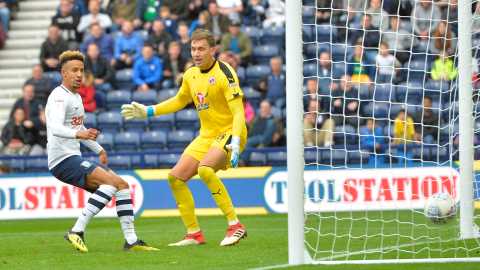 “It’s a frustrating afternoon all round,” conceded Earl to the club’s media channel, iFollowPNE.

“You shouldn’t have to score four goals at home to win a game and we all recognise that we had a lot of chances but it’s a very frustrating day for us.

“The formation worked well to start off with and we all adapted to it really well and we did get a few good chances early on before we went behind. If we take them it’s a different story. We just need to go again Tuesday now.”

Earl came into the side today in his first league start of the season, and played a hand in both PNE goals this afternoon. It was his cross that eventually led to Daniel Johnson stroking the ball home, whilst his low drive deflected off Callum Robinson and into the net.

“We’ve had some chances even at the end, a few from me which I should have taken and would have done on a different day,” continued North End’s No. 3. “But we’ve got to keep fighting and keep our heads up.

“It felt like on the pitch that we were on top, the wing backs were high and attacking quite well, we just got caught on the break a couple of times.

“I thought we adapted to the formation really well, especially considering we’ve only been working on it for a week - but we’re all intelligent players and a lot of them have played in that formation before.

“We’ve just got to keep pushing and not let our heads drop and push to try and get that win, and once we get that break the runs will start to come.”

Watch the full interview with Josh on iFollow PNE now by clicking on the video above.