Five different players were on the scoresheet as the youth team beat Huddersfield Town 7-0 at the PPG Canalside Sports Complex.

Adam O’Reilly opened the scoring while Tyrhys Dolan and Darren Brannigan – both of whom could have claimed one of the second half goals as their own – made it three at half-time, as Ethan Walker and Louis Potts’ double rounded off the scoreline for another Youth Alliance Cup group game win.

All 7️⃣ goals from yesterday’s emphatic victory against Huddersfield Town, with @Adam_o_reilly, Tyrhys Dolan, Darren Brannigan, @Ethanwalker_7 and Louis Potts all on target! 👏

Huddersfield had a clear emphasis on playing out from the back from the off, seeing the majority of the ball early on, but that style suited North End’s pressing game.

Walker was the first to hit the target as goalkeeper Giosue Bellagambi turned behind his low strike and Darren Brannigan headed wide in the subsequent attack.

Walker blazed marginally over shortly after while O’Reily just failed to connect with Lewis Simmons’ cross and Brannigan’s header was saved by Bellagambi.

The breakthrough came after 14 minutes thanks to the alertness of O’Reilly, who intercepted a pass inside the box before finishing coolly through the legs of Bellagambi.

The lead was doubled five minutes later when Walker cut inside and reversed it down the left for Dolan, who charged into the box and dinked it perfectly over the goalkeeper. 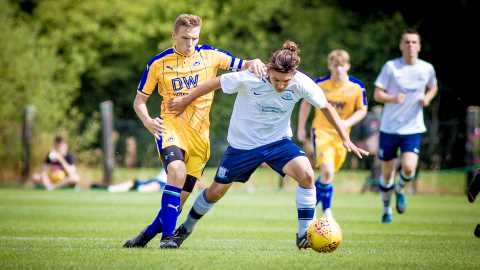 The hosts might have pulled one back midway through the half but for a great save from Jimmy Corcoran to deny Jaheim Headley, who provided Huddersfield’s greatest threat, from close range.

Ten minutes before the break, the Lilywhites struck again as Jack Armer intercepted in midfield and delivered to Brannigan in the box, striking into the bottom left corner.

Huddersfield’s best spell came just before the interval with Headley at the heart of things, taking down a long ball forward but not getting enough power on his attempted lob over Corcoran and then firing over down the left, while Walker and O’Reilly’s piledrivers were saved late in the half.

Andre Edionhon and Andrew Ijiwole were brought into the fold for the second half but PNE’s dominance continued as O’Reilly and Jolly each looked to catch Bellagambi out with long range chips, both curling wide.

Only five minutes of the second half had been played when North End made it four with Brannigan rounding off a neat move around the box by teeing up Walker to guide it into the far right corner.

It was five by the 52nd minute, Dolan capitalising on a loose ball from a corner and poking towards goal, his close range shot looking destined for goal before taking a minor touch off Brannigan.

Louis Potts, Josh Pollard and Tyler Williams were introduced to the action with half an hour remaining, the latter quickly involved in the action by flicking a corner on for O’Reilly, whose thunderous volley came back off the underside of the crossbar.

Williams himself headed over at the near post from a corner before O’Reilly chipped agonisingly wide of Bellagambi’s right-hand post from ten yards.

Brannigan had a goal disallowed for offside moments before substitute Potts made it six in the 73rd minute, controlling Brian McManus’ pass and curling into the same far right corner.

Walker flashed a low strike wide of the far-left corner while Edionhon dragged a rare chance past the post the other end.

Brannigan had his shot from the angle well saved late on before Potts completed the scoring in added time, finishing on the volley after the another of the former’s shot was palmed to him.

Academy boss Nick Harrison was delighted with all aspects of his team’s performance.

“It was a really good, aggressive performance in terms of trying to win the ball back high up the pitch and I thought we did that on numerous occasions,” Harrison told PNE.com.

“The players showed great desire and composure in front of goal to put the ball in the back of the net as many times as we did. We’re delighted with the performance and the result.

“It’s [Huddersfield’s playing style] something that we saw on the videos of the games they’ve played. We set up to do that [press high] and we have players who can work hard, defend and win the ball back and they did exactly what we asked of them.

“We actually could have scored two or three more so the scoreline didn’t flatter us, we thoroughly deserved it, so we’re delighted with the way the boys applied themselves given what we asked of them.”

The youth team boss was equally pleased that his team continued their relentless streak in the second half and maintained their concentration to keep a clean sheet as well.

“We had a spell in the first half at 3-0 where we were a little bit slack on the ball and maybe weren’t concentrating, so we talked about that at half-time. We looked a lot better on the ball when we passed it quickly and progressively and we did that really well in the second half

“It's brilliant to score lots of goals but we would’ve been disappointed to have conceded two or three, because they did have a few good chances. Every team is going to do that and I thought we defended well and the back four, which turned into a back three later in the game, dealt with that really well.

“We came up against a group of players who could pass the ball well but we stood up to that, we really competed all over the pitch and when we won the ball, we had large parts of the game where we passed the well but passed it forward and that’s why we created as many chances as we did.”