Adam O’Reilly believed the youth team were unfortunate not to extend their winning run as they fought to the end to draw 1-1 with Bury.

Tyrhys Dolan scored a 93rd-minute equaliser to gain a point for the Lilywhites, but the hosts had created numerous opportunities throughout while O’Reilly himself had an early penalty shout waived away.

The Irishman was pleased that that late goal at least made it seven games unbeaten but stressed that he and his teammates were keen on getting back to winning ways as soon as possible.

“I thought we deserved more in the game because we created a lot of chances for ourselves in the first half,” Adam told PNE.Com.

“But to get that goal in the last few minutes is a big bonus because it shows we have that determination to get back into the game no matter how long is left. Credit to ourselves because we did work our socks off during the game.

“That’s another big goal that we’re aiming towards for the rest of the season, to not lose games and keep the unbeaten streak going or just not to concede in games. That’s going to be one of the goals we have throughout the season and try to get the job done game by game.

“Even just to get a draw out of it means we’re happy but it’s back to the drawing board now and try to get the wins going again.” 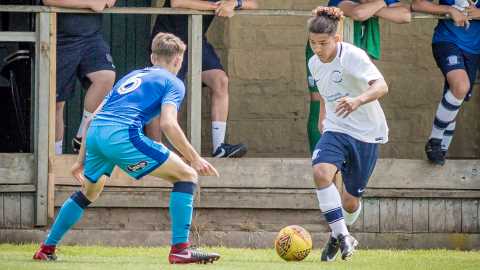 North End were particularly dominant early on as the 17-year-old admitted that the team were slightly knocked back not to have scored in that period, as he also spoke of the possible penalty shout which came in that time, but insisted it was a case of biding their time.

“We were a little frustrated [not to score early on] but we couldn’t let that get to us, we just had to keep chipping away and try to get the goal back. Fortunately it did come in the later stages of the game, that’s what we were working towards and that’s what we got.

“I thought it was because I was about to cut across the player and there was just no way it wasn’t a penalty in my opinion. He wasn’t anywhere near the ball and it was just a nudge so I thought it was a penalty, the same as the rest of the players on the team.