Louis Potts felt playing with more width and getting more balls into the box was the key factor in the youth team’s late comeback against Walsall.

The 16-year-old set up Jack Baxter for a 79th minute equaliser before Tyrhys Dolan grabbed a brace to seal an impressive 3-1 win for North End’s youngsters. 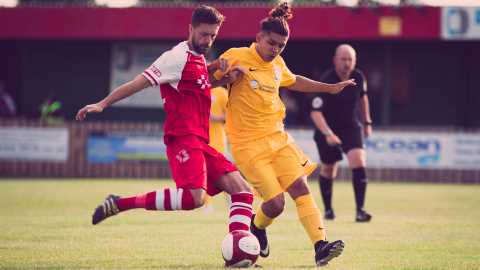 The Saddlers had not opened the scoring themselves until the 72nd minute, the play before then having offered few chances for either side, with Potts explaining the change in the Lilywhites’ fortunes was a result of quicker and more direct play.

“It was a really good win,” the forward told PNE.Com. “When we went a goal behind, I think the lads had a great reaction.

“We scored a quick goal with Baxi [Jack Baxter], a really good finish and then Ty [Dolan] got two after that. The reaction was really good from the boys, so we’re buzzing with the win.

“I think we just moved the ball quicker [after Walsall scored] and got it out wide by trying to get past our men and put balls into the box and that’s where we got our goals. We got it out wide and put the ball in, it was two good finishes and then Ty with one from long distance.

“When we got it wide and put balls into the box, that’s where the game changed. I got the ball out wide [for Baxter’s equaliser] and I could just see him, so I set him to shoot and it was a great finish by him so I was really happy with that as well.

“We’re all confident, it’s six wins in a row now. The atmosphere in the changing room is good, especially after we’ve come from behind, we’re all buzzing and we couldn’t be any happier.”

Potts was tasked with playing across the forward line in the match, switching from the left and right flanks before finishing up in a more central role.

The Salford-born striker agreed that moving into that striker’s role might have helped the team late on but he said that he enjoyed playing in all three positions.

“I’m just happy to play anywhere, I just love playing so if it’s on the left, right or down the middle, I don’t mind,” he continued.

“It was difficult to make an impact but wherever Fenners [Andy Fensome] tells me to play, I’ll play there. I just want to do the best I can for the team and I’m happy to play across the front three.

“When they scored their goal, I think me moving into a more central position helped because there were more men in the box and that area in and around the six yard box is where we got our goals.

“I’m going to give all I can in training to try to keep and my place in the starting line-up and anything I can do in the final third, I’m going to try it and try to make as much as an impact as I can.”