The youth team will make their penultimate outing of season on Saturday morning with the goal to lift the Lancashire FA Professional Youth Cup trophy.

The young Lilywhites are set to face Wigan Athletic in the final of the regional cup competition, with an 11am kick-off at the Lancashire FA County Ground, Leyland, PR25 2LF and entry priced at £5 for adults and £3 for concessions. 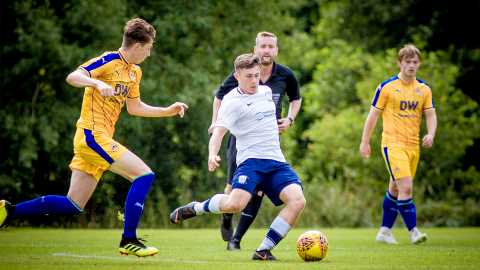 The two sides last met as recently as last weekend, with North End earning a 2-1 victory at the Latics’ Christopher Park Academy training base, thanks to goals from Adam O’Reilly and Jacob Holland-Wilkinson.

However, Wigan were successful in the season-opening meeting between the teams back in August, triumphing 4-2 at UCLan Sports Arena, and were also on the right side of last season’s final in the same competition, that against the Lilywhites, too.

Nick Harrison is therefore wary of the test that Wigan, who were crowned North West Youth Alliance league champions just shy of a fortnight ago, will pose to his team.

“I’m sure everybody within the group will be looking forward to a cup final,” said the Academy manager. “It’s a great way to finish the season almost, the second to last game of the season, and hopefully we can put in a good performance like we did last Saturday.

“I think it’s going to be a good game, that’s what we come to expect when we play Wigan. The players have just got to make sure that they perform well and do everything they can to win the game, which is what we’ll be looking for on Saturday.

“It’s going to be a lot tougher [this time], but we’re more than capable of getting the result and putting in a good performance.” 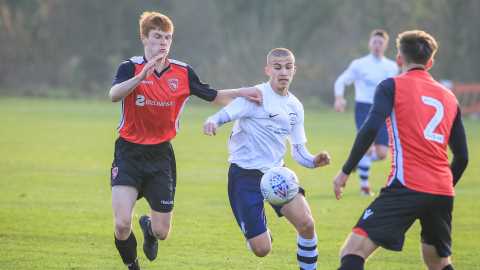 Saturday’s win at Wigan was the last of North End’s youngsters’ seven-match unbeaten run, which has since been halted by a midweek defeat to Morecambe, with the Latics presented with their league title prize in front of the PNE scholars.

Harrison hopes that might provide an added incentive for his players, as well as looking back to the defeat his team suffered to the same opposition in last season’s final.

“We watched Wigan pick up the league trophy after the last game and hopefully that will be motivation for our players to make Wigan watch us pick the trophy up on Saturday.

“I think we were pretty young last year and that’s maybe an advantage this year that we’ve got players who have experienced that.

“I’m sure all of that will help, we’ve got some good players in our Academy and it’s just a great opportunity for them to show how good they are.”

Last year’s final was played at Wigan’s training ground, an alternative venue unable to be found due to a fixture backlog at the backend of last term for both teams, and although pleased this season’s showdown will be on neutral ground Harrison has urged his side to concentrate on the game itself.

“That’s what the players want to do – to play in front of a crowd, to play on a big stage. Youth football is all about experiences and opportunities and the players are certainly going to get that in abundance on Saturday.

“What they’ve got to do is play the game right way – play the game and not the occasion – and we’ll be working with the players to try to put in a good performance and win the game.”

For those unable to attend the game, we will have coverage on our social media channels including live text commentary on our Academy Twitter account @pnefcacademy so you can follow all of the action.

There will also be a match report to follow on PNE.Com as well as a full match replay and post-match interviews available on iFollow PNE later this weekend.