Preston North End manager Alex Neil is expecting a tough test when his side take on Steve Bruce’s Sheffield Wednesday at Deepdale in the final home game of the 2018/19 season on Saturday afternoon.

The Lilywhites face the Owls for the 100th time in league fixtures and the PNE boss is aware of the qualities of his opponents.

“Steve is an experienced manager at this level, he has had numerous promotions and he wouldn’t have taken that job if he didn’t think he could go in and have a real impact,” said Alex.

“If you look at their squad, you can understand why he has felt he was going to go in there and have an impact. They have got a team, previous last year, were in the Play-Offs for a few years.

“They have vast experience throughout the squad; guys who have been there and done it – got promoted from this level, played at higher levels and have got some real quality players.

“He has gone in there, got them organised and allowed them to express themselves and he has done a great job since he went in there.”

The gaffer’s first competitive game in charge of North End was against Wednesday on the opening day of last season, when a penalty gave them a 1-0 win, and Alex is delighted this game is at Deepdale!

“Normally at home I have a pretty good record against them,” he continued. “Away it is atrocious! I really don’t like going there [to Hillsborough], it has not been a good hunting ground for me at all.

“We have got two games left; this is the last game at home, we want to finish on a real positive and hopefully we can go and give a good performance.

One decision the manager has to make, is whether to recall Ben Pearson after suspension, especially with him walking another ban tightrope, sitting on 14 bookings and he admits that he had considered leaving the No.4 out for the pair of final fixtures.

“It was certainly a consideration. But we should not be getting to a stage where we are not playing players to prevent them from getting a booking – that is a ridiculous situation to get yourself into. 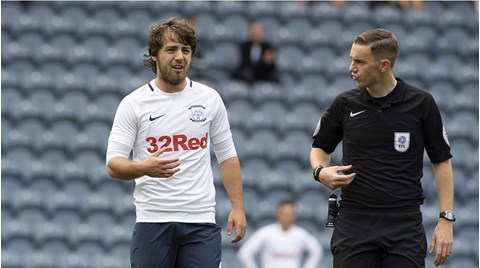 “Ben’s got a responsibility to himself and to us that he goes and conducts himself well and doesn’t get caught up in anything silly.

“It was something I was considering [leaving Ben out], but now Ryan has got himself sent off, it has made the decision doubly difficult.

“I won’t shy away from making that decision. If it doesn’t go the way it is planned and he picks up a booking, I will bear the brunt of that, but he has to go on the pitch, make sure he applies himself without being silly.

“At the end of last season, he went six games without picking up a booking, so he is more than capable of that.

“We want to finish the season well. I don’t want to go out with a whimper. On Monday, I was frustrated as much as I have been in a long time, because I didn’t think Wigan were particularly good and we had enough opportunities in the game, but made it difficult going down to ten men – but we want to try and rectify that,” added Alex.