One of seven scholars set to join the U18 squad on a full-time basis in the summer, the 16-year-old has made 15 appearances in his breakthrough campaign at this level, despite having also come off the bench a handful of times as an U15 last term as well.

When North End and Blackpool last met for the reverse fixture back in November, however, Coulton hadn’t yet appeared for the youth team in competitive this action season and that’s made for a memorable second half to the season for the Scotland youth international.

“I went and watched the last game against Blackpool and then the game after I was called up, which was exciting for me,” Coulton told PNE.Com.

“I’ve gone on from there and now we’re at the end of the season and I’ve made my starts, been on the bench sometimes and it’s been a great season.

“I can’t get ahead of myself and I’ve just got to keep going every game. If I get picked for the squad then I get picked, but if I’m with the U16s then I play with the U16s, that’s my own age group.

“I’ve been brought through to the youth team and I’ve just taken things as they’ve come all season.”

Leyland-born Lewis was relieved to see Jack Baxter equalise for the young Lilywhites in the latest meeting between the sides, earning them a point in their final match of the 2018/19 campaign. 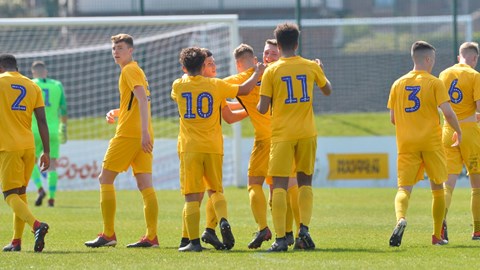 “It’s the last game of the season and you never want to lose that and getting a draw out of that was good in the end,” he continued.

“It was a tough game and we managed to pull it back in the last two minutes. They battled and we battled back but I think we got what we deserved.

“We had a few chances before that, they weren’t big chances, but then we took one – obviously it was a great strike by Jack – we took what we needed to take and we could even have gone on to win the game.”

The youngster is now looking forward to working with the Academy coaches on a daily basis when officially becoming as a scholar in the summer.

“I’m looking forward to it, it’s what every young lad wants to do, isn’t it – to be training every day and playing football? I’ve got that opportunity and now I just need to keep working hard and see where that takes me.

“I’ve learnt that there’s a big difference stepping up from the U16s to this level – it’s more physical, its quicker – but now I think I’m ready for it, I think I’ve took it well and now I’m just looking forward to next season.

“Training every day is always going to make you a better player, I’ve just got to make sure I stick at it, don’t let off the gas and keep going.”