Louis Moult was honoured to pick up North End's Community Player of the Year Award over the weekend, but admits his motivation towards community work is far greater than individual accolades.

Since arriving in Preston in January 2018, Louis has made it clear his intentions off the pitch as a fantastic role model and pioneer for the work the Community Trust has done this year.

This season alone, Louis has spent time meeting children at North End's soccer school whilst taking part in PNE's school provision through its Premier League Primary Stars programme, but its his significant work in helping combat homelessness and addiction which has arguably made the biggest mark in the community.

"It’s a great honour for me to receive these awards" said Louis. "I’m not in it to take plaudits or anything like that, I just want to help.

"I’ve had a frustrating time this season due to injuries and not playing as much as I would have liked to, so I’ve tried to turn that into a positive and when the team asked me to go down to the Foxton Centre and help out, that’s what I did

"First and foremost it made me feel really good about myself that I was helping, but also because I was helping other people. For me and for everybody else, it was a win, win."

Louis' work towards homelessness and addiction is largely in aid of the Foxton Centre, a local homeless charity in Preston which Louis has volunteered for, both for PNE's Christmas Donation Centre and as part of this year's EFL Day of Action.

Coupled with his volunteering, Louis has also helped raise awareness by appearing on national news such as BBC Breakfast and North West tonight, channelling his own personal experiences towards making a difference on the topic.

On his work with The Foxton Centre, Louis added: "The reaction is got was unbelievable and I didn’t expect it to get the reaction it got too be honest.

"The amount of people that contacted me thanking me for spreading my story and saying how much I helped them in their lives was unbelievable. It was very overwhelming and it was something I’m very proud of doing, and I thank Preston for helping me do it. 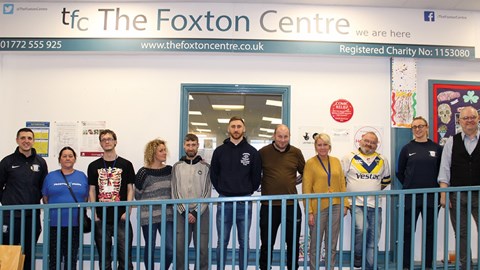 "We have such a modest group of individuals and players at this football club because of the way the club is run. Everybody loves helping people, you see it in the performances on a Saturday or on a Tuesday and Wednesday night; they give one hundred percent and that’s what we do on and off the pitch."

The club's Community Player of the Year trophy is combined with the PFA's Community Champion Award which is ran in conjunction with the Professional Footballers association, and celebrates the work that footballers do off the pitch.

John Hudson, PFA Director of Corporate Social Responsibility said: “The PFA believes that players who make that extra effort and contribution during the season should be recognised for their support and involvement in the local community. The Award will hopefully raise awareness of the great contribution and importance many of our members attach to their roles off the pitch. We would like to offer our congratulations to this season’s recipient of the 2018/19 PFA Community Champion Award.”

Preston North End's work alongside the Foxton Centre is only just starting with a stadium sleepout in aid of the charity planned at Deepdale. To find out more, click here.