Former Preston North End centre half Michael Jackson joined the Official PNE Club Podcast this week to revisit his crucial goal at the then JJB Stadium back in April 2000, which was a huge step along the way to seeing the Lilywhites seal promotion to the Championship.

Back in the 1999/2000 season, David Moyes’ team travelled the few short miles down the M6 to face fellow promotion-chasing rivals Wigan Athletic.

North End needed a win to put a big gap between themselves and the chasing pack in the promotion hunt, of which the Latics were one of them.

Just over quarter of an hour into the game, defender Jackson took advantage of a scuffed Latics clearance to put his team in the lead with an acrobatic finish after David Eyres’ corner - an advantage that would remain until the final whistle.

Jackson, now on the coaching staff at Tranmere Rovers, recalled that wonderful night with Guy Clarke on the podcast: “It’s a long time ago, 19 years. We knew that was going to be a big game - if we could win that, it was going to kick us on till the end of the season.

“Before we went out, everybody was ready for that game, it was a really strong group of lads and a really good manager as well. It was a big result on the night.

“I just remember the crowd, I looked back and someone recently showed me some footage of it. I remembered how big of a following we took that time. It was a great night.”

Full of praise for the fans, Jackson remembers how great the win was - not just for the club, but for the whole city: “I think it meant a lot to the town as well. We really needed to get that promotion, especially after the year before when we missed out on the Play-Offs,” he continued.

“The whole group was focused on doing that. It meant a lot, we didn’t want to go through that again, and the fans were great.

“That was massive, I remember behind the goal, the following that we took, which is great when you’re playing away from home, it boosts the players - you don’t want to let them down.

“You go to those games and you think ‘these people have come here to support you’.”

Although it was a great finish, acrobatically hooking the ball over a helpless Roy Carroll, Jackson played down his technique - claiming he was just desperate to get anything on it.

“I don’t really score many like that, no. I always wanted to try and get on the end of set plays, we always worked on that.

“We had players with great deliveries, people like David Eyres, who we knew could put the ball in certain areas.

“But really, you’re just reacting there and hoping you can get something on it. And fortunately we did.” 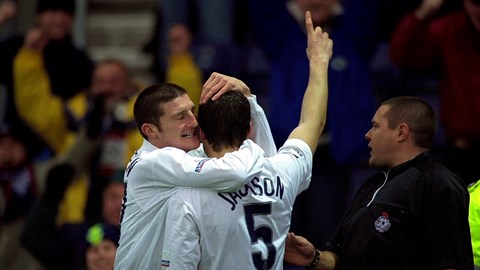 Even now, almost two decades on, the 45-year-old praises North End’s family feel and credits that with the club’s success during his time.

“Sometimes you are fortunate in your career to work with good managers and a good group of players and you appreciate that when you go somewhere else, especially what you take away from there.

“The people around the place, everyone knew each other, even at the training ground everyone knew all the staff. People behind the scenes were all really close.

“It was like a big family thing there and it was important to this group of players, we worked hard as a group.

“They always wanted to do well, we were always on each other’s back. It was something that was so special at the time and it was so good to be part of it,” he added.