Nick Harrison felt there were positives to be taken for his side despite falling to a 5-2 defeat to Wigan Athletic in the Lancashire FA Professional Youth Cup final.

The Academy manager watched on as two penalties were awarded against his team to see them trail by two, before Adam O’Reilly halved the deficit with a wonderful strike from outside the box. 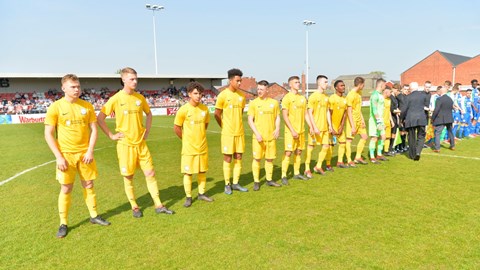 Jack Baxter went one better, cancelling out a Wigan third by scoring from inside his own half, before Victor Maffeo’s brace saw Latics move out of sight, and it was the attacking play which pleased Nick most while he admitted his young Lilywhites needed to do more at the other end of the pitch.

“I actually thought we played some good stuff at times,” the Academy manager told PNE.Com post-match. “We passed the ball well, we switched it and got players into good positions.

“There was a little bit of a lack of understanding of when to pass, when to dribble in the final third with a couple of players but we did play some good stuff.

“In the second half, straight after they scored their goal, we looked threatening and had one or two chances. But one we’re not clinical enough and two, when we did lose the ball, I don’t think we did well enough to stop them breaking us down and getting in behind us.

“I felt we really had to work for our chances, whereas I thought we were a bit naïve and a bit weak in terms of our defending which allowed them to score the goals they did. It was a competitive game apart from us not dealing well enough with their forwards and that’s why they scored the goals.”

Harrison felt his side needed to be more clinical on the whole but praised Adam O’Reilly and Jack Baxter, the second year midfield pairing whom have both already signed professional deals with the club, for their wonderful goalscoring efforts.

“We passed it well in periods, we did get on top but just didn’t take our chances although the goals we scored were very good.

“Those were from two players who have been in and around the first team squad for almost all of their scholarship and it tells; they’ve got great quality and hopefully they’re going to go on to develop and be really good players.”

On the two penalties which saw Wigan take a two-goal lead after the half hour, Harrison felt both decisions were debatable ones.

However, he is now simply looking for his side to finish their campaign on a high, as they play their final match of the season on Wednesday afternoon against Blackpool.

“I’ve not seen them [the penalties] on the video but the first potentially may have been outside the box, but I thought the second one wasn’t a penalty. I think when you go 2-0 down in a final it probably takes the wind out of you a little bit.

“You can see the first team had to do that [react after defeat] – they had a really tough week in terms of the opposition they were playing – but you look at the game on Friday and they bounced back by scoring four goals and keeping a clean sheet.

“That’s got to be the objective for our lads on Wednesday, it’s a derby game against Blackpool and our lads have to get themselves up for that. It’s the last game of the season, they should want to finish on a high and that’s what we’ll be tasking them with.”