Youth team forward Louis Potts felt he and his team-mates lacked some good fortune in their defeat to Morecambe but is looking to move on from it quickly approaching Saturday’s Lancashire FA Professional Youth Cup final. 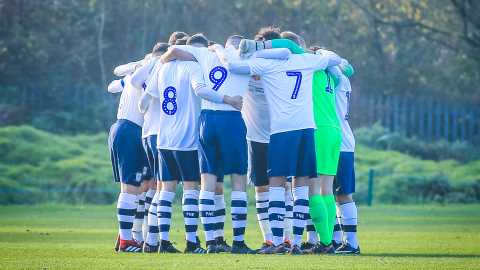 A North End side which saw three schoolboys start and two more come off the bench fell to a 3-1 defeat against the Shrimps on Tuesday afternoon, with the visitors’ solitary goal prodded home by Potts 15 minutes from full-time.

That goal pulled Nick Harrison’s team level at the time but the hosts scored twice more in the latter stages to halt the youth team’s seven-match unbeaten run, but Potts says the scholars will not be dwelling on that form coming to an end in a game in which he felt the team were unfortunate.

“I thought we were unlucky,” Potts told the club website. “We created some good chances in the first half and I think it was just one of those games. I thought we should have had two penalties but they managed to get one, so I just think it wasn’t our day.

“The penalty that we conceded I thought was very harsh, and the second penalty appeal in particular which we had 100 per cent should have been one, no doubt about that. I think we’ve been a little bit hard done by.

“Once we got the equaliser, everyone got a bit confidence from that goal and I thought we could have gone on and won the game, as did everybody else, but it was just one of those days.

“It’s come to an end [the unbeaten run], but there’s no reason why we can’t start winning games again and hopefully we can start that again on Saturday.”

Saturday’s game is the youth team’s penultimate outing of the season and it will see them go head-to-head with league champions Wigan Athletic, whom the young Lilywhites defeated 2-1 away from last weekend, in the Lancashire FA Professional Youth Cup final.

And 17-year-old Potts believes North End can take confidence from that victory ahead of the second contest between the sides in the same week, in what is a repeat of last season’s final in the same competition, in which the Latics were victorious.

“It’s a big game on Saturday and we’re all hoping that we can win the final obviously,” he continued. If we can put in another good performance, there’s no reason we can’t win it.

“We all had a good game last week against Wigan and as long as we can play well, there’s no reason why we can’t win again.

“We will be 100 per cent confident going into the game, as we always are, and hopefully everything goes well and we can win.

“We can definitely use last season’s final as motivation. We got beat last year so hopefully this time it will be our year.

“It’s a good chance for everyone to come down, I’m sure all the lads’ families and friends will be there and hopefully it will be a good crowd, a good atmosphere and we hope we can get the win.”