Joe Rafferty hailed his Preston North End team-mates for turning on the style to defeat Ipswich Town 4-0 on his first start for the club since his January arrival from Rochdale.

The Lilywhites cruised to victory at Deepdale as Callum Robinson and Lukas Nmecha scored a brace apiece in either half, Rafferty having a strong hand in the former’s impressive second on the volley.

Robinson’s first after six minutes very much set the tone for a free-flowing display from Alex Neil’s side and 25-year-old Rafferty admitted it was an enjoyable match in which to make his full debut, following appearances off the bench against Blackburn Rovers and Middlesbrough last month. 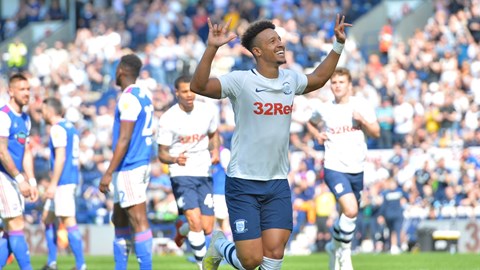 “I loved it,” he told iFollow PNE of his maiden start. “I’ve been dying to play for a while now, it’s been frustrating, but the boys have been doing unbelievable, especially when they went on the 12-game unbeaten run. I’ve just been making sure I’m ready to go and I thought I did quite well today.

“We try our best in every game and sometimes it comes off, sometimes it doesn’t and today was just one of the games where everything fell for us, we worked as hard as we could, even in the weather, and everything came off for us – the goals were unbelievable.

“It was a perfect full debut for me really. The lads were brilliant out there and I was lucky that we played so well on the day and got the win.”

The defender praised goalscoring pair Robinson and Nmecha for their clinical touch in the final third to earn all three points for PNE.

He was especially pleased to see the former catching a defender off guard for the first – Rafferty admitting to having been the victim of a similar move in training a couple of days previously.

“He [Callum Robinson] was very good. I said to him after the goal – because he’d done something similar to me in training a few days ago – ‘You’ best do that in a game,’ and he came out there and he did! Both of his goals were unbelievable goals.

“[For Callum’s second] I got down the wing and put the cross in and then it ended up falling to Callum and then he put it in the top corner which was unbelievable.

“It’s brilliant for him [Lukas Nmecha]. He’s got all the ability in the world and he’s a confident lad, he believes in his own ability and he knew, and we knew, that the goals would come eventually for him – he’s too good not to be scoring.

“We’re made up for him, we’re made up he’s scored two and hopefully he can get a few more before the end of the season.”

Rafferty now hopes to cement his spot in the side between now the end of the campaign, with the next task to keep his place for the short trip down the M6 to face Wigan Athletic on Easter Monday.

“I’ve played at Wigan a few times over the years and I presume that the Preston fans will travel in great numbers again like they always do and it’s kind of a local derby, so we’ll go into it and hopefully try to win it.

“I’m hoping to just try and play every game towards the end of the season now. Hopefully if I can play the last three then that will be good for me going into next season.”