Louis Moult was delighted to score his first goal of the season and help PNE claim all three points in a 3-0 victory over Wigan Athletic. 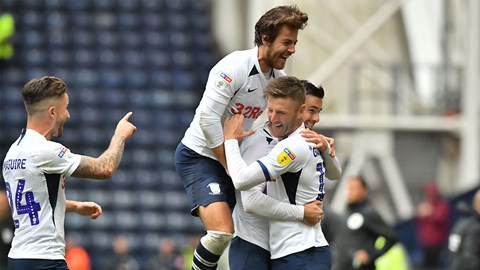 Moult, who made his first appearance of the season on Saturday afternoon, scored North End’s second of the day which sent them well on their way to all three points.

The striker’s goal came either side of an early Sean Maguire header and a superb Paul Gallagher strike.

Speaking about his goal, Moult told iFollow PNE: “I was absolutely buzzing; you can see that from my celebration. The gaffer’s given me the chance today and I’m grateful for that. I’d like to think I’ve repaid him with the goal.

“It was an unbelievable ball from DJ [Daniel Johnson] and that’s what DJ is all about. He played a little bit further forward today and I thought he played really well just off me. Some of the link up was brilliant and we started very very brightly.”

It was Maguire who opened the scoring after just six minutes, and he may have PNE’s number nine to thank for his movement in the build up.

Moult said: “I actually didn’t see the goal. I’ve ran across the front post, took the guy out of the equation and I don’t know what happened after that but we were celebrating and that’s all that matters.

Those two early goals gave the home side some breathing space, and other than a few shots from distance, the Whites looked comfortable in defence. 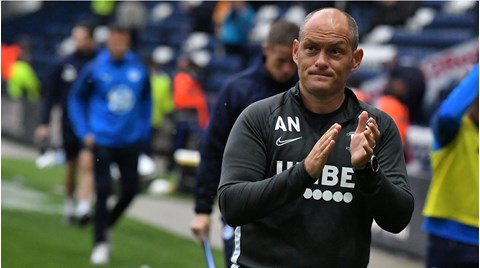 “We stayed narrow, we let them go wide and cross the ball. We dealt with everything that came our way today.

“The shots that were on goal were from 25 or 30 yards and we’ve got confidence in our goalkeeper so it’s very pleasing form a whole squad performance.”

The torrential conditions at Deepdale may not be to everybody’s fancy but Moult enjoyed the game in the rain.

He said: “It felt like a proper, proper game today. I love playing in them conditions, the weather was brilliant for it. I thought the style of play we played suited me and us down to the ground.

“What was important was the fans getting behind us and they were so vocal. It gives us that extra yard; it was brilliant.”

Saturday’s victory came after an opening day defeat to Millwall, and Moult is confident that the squad can now kick on.

He said: “We’re a confident bunch of lads. We believe in ourselves and we like to think everyone else believes in us.

“The squad of players plus the ones the gaffer brought in went 12 or 13 games unbeaten last season so there’s no reason why we can’t do that again.”