Preston North End manager Alex Neil spoke to iFollow PNE to look ahead to the Carabao Cup second round tie with Hull City at Deepdale.

26 August 2019
And before touching on the game itself, he reflected on the weekend’s win over Sheffield Wednesday, where he felt his side had shown a development from last season.
“It was a different test for us,” said the gaffer. “We had to adopt a different strategy in terms of how we were going to play. I have watched the game back and we moved the ball well in the first half, but probably created more chances in the second half and then we looked more dangerous.
“It is always difficult when teams camp the whole team behind the ball, but thankfully we broke that deadlock and that really changed the game. For 75 or 78 minutes we were really comfortable, but teams are always going to throw caution to the wind.
“When they bring on someone the size of [Atdhe] Nuhiu and we lose Patrick [Bauer] running up to that, it was always going to be difficult and I just felt as though we needed to alter things to make sure we saw the game out.

“That is another side we have needed to improve – there were some games last season when we would maybe not have picked up the three points, but that lads did great and we got over the line.”

26 August 2019
The Lilywhites’ boss was particularly pleased with one of the four changes he made to the side, with Sean Maguire back after concussion.
“I think Sean has had a good start to the season,” continued Alex. “As a forward, we have been trying to get into him to be on the half turn and play facing the opposition’s goal, rather than being as a focal point, but he hasn’t managed to do that as a nine.
“It can be done, because Tommy B [Barkhuizen] didn’t play as a focal nine, he played as a running nine, but Sean seems to be more comfortable playing that role and adopting that stance off the left and he did very well there, so it has been very productive for us.”
Moving on to Tuesday night’s clash with the Tigers, the PNE chief expects to again make changes and also expects the opposition to do the same, meaning he will be focusing on his own side and their plans for the game.

“The lads are in good spirits, they are confident and we have another set of lads who will be hungry to play, who did play well at Bradford and I am sure a lot of them will be looking for an opportunity. 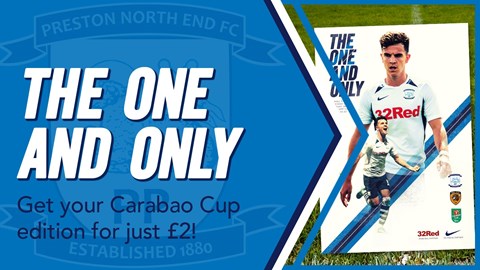 The One And Only Issue Four

26 August 2019
“We have played three games in a week, which at this level is some going. Not only that, but Saturday’s game was played in 25 degree heat, so it really takes a lot out of the players.
“I know it is the same for every team, so there are no complaints for us, but it is important – like we did on Saturday – to freshen a few up.
“It was no surprise to me that one of the fresh players was key, in Sean. We will need to freshen it up again, a few of the lads will want an opportunity and it will be good to see them get a chance.
“What we will do is to cast a glance over what they have tended to do as a group, because generally, even though they are changing personnel, their strategy will stay the same.
“We will cast a glance to what they do, but we will mainly focus on how we want to play and the players who are playing and giving them the best chance of doing well,” he added.