Preston North End manager Alex Neil felt his side did what they had to, to rectify matters, by winning the penalty shoot out against Hull City that put the Lilywhites into the third round of the Carabao Cup. 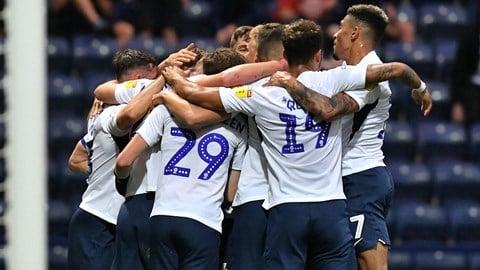 27 August 2019
The Lilywhites had gone 2-0 up through Paul Huntington and Josh Harrop, with his third in as many games, but a Josh Magennis penalty and a last-ditch close-range strike from Jarrod Bowen took the game to spot kicks.
However, Harrop, Ryan Ledson, substitutes Jayden Stockley and Billy Bodin scored, Connor Ripley saved from Tom Eaves and North End skipper Alan Browne won it by converting the tenth and final penalty to make it 5-4 to the home side.
Speaking to iFollow PNE after the game, the manager felt it was a game of two halves: “I thought it was very mixed,” he said. “I thought in the first half we were great, we moved the ball really well and created a lot of opportunities, scored two good goals, so we were really pleased at half-time.
“We knew that Hull were going to come out, be more aggressive and impose themselves more on the game in the second half, but I thought the big turning point for us was that we lost Tommy B [Barkhuizen] at the top end.
“His running and his energy kept them relatively deep, which meant that we could control the ball from deep.
“I thought we dropped off when that threat of pace in behind went away and that allowed them to lock us on and basically smother us and when you are playing with two right footers on the left side of your defence, that is always going to be difficult to build through that.
“That caused us a real problem; we had to go back to front really quickly and we didn’t really keep the ball at the top end. Hull became the dominant team and we were disappointed we didn’t see the game out.
“I didn’t think there were any real clear-cut chances that should have cost us, but we didn’t defend our box, we didn’t get our quick enough and we got punished.”
The role of Barkhuizen and fellow front runners, Andre Green, Brad Potts and Josh Harrop was a huge influence on the way the team played in the opening 45 minutes.
“The guys at the top end of the pitch, who don’t touch the ball, gave the likes of Ryan [Ledson] time on the ball, by their running in behind and making the game very big – that’s what they did,” continued the gaffer.

“The full backs were really high and really aggressive in the first phase and in the second half they were really deep, so we couldn’t really get out and that was purely down the fact we had pace at the top end that really stretched it for us and it allowed the midfield players to dictate the ball and open the pitch out.

“That changed the game and I knew that would be the case at half-time, but there was not much I could do about it.”
But Alex was pleased with the bravery shown to step up and put things right in the end of game lottery of penalties.
“We discussed it after the game. They were disappointed with how they had played in the second half and I had said to that we had chucked it away a little bit and the only way to rectify it was to go and win the penalty shoot out.
“To be fair to them, they were brave, they went up, stuck their penalties away and Connor [Ripley] did really well with the save that he made and that allowed us to get through to the next round.
“I am pleased for the lads. We had a couple of players playing out of position and guys who had not played in three or four weeks – the likes of big Hunts – so it was always going to be tough as the game wore on.
“The fact we lost Tommy B as well, made a couple of changes, but we are through to the next round and we will see who we get now,” he added.