Preston North End manager Alex Neil admits that despite another positive performance and result on Wednesday night, he will look to utilise his whole squad over coming games.

22 August 2019
Speaking to iFollow PNE to look ahead to the clash with Sheffield Wednesday the gaffer said many factors would be considered before he named the side to face the Owls.
“I picked a team on Wednesday night to go and try and beat the challenge in front of us and thankfully it managed to work,” Alex explained.
“It wasn’t easy, because we had lost two of our front three from the weekend and I spent a long time thinking hard about how we could utilise the players we had available and thankfully the boys played really well.
“But Sheffield Wednesday is a very different challenge and I will have look at their other games, to decide what are the best options, depending on who is available.
“The last thing we want to do is have an extensive injury list and if we keep relying on the same players all the time at this level, where the games come thick and fast and are played at such a high tempo, then naturally their bodies are going to break down. It will come into my thinking, in terms of looking at the squad and freshening things up.

“I like to focus on one game at a time, but I would be lying if I said you didn’t cast an eye on the games coming up as well and who would be suited to them. You pick certain players against certain opposition and think about others further down the line and that’s something we will do.”

22 August 2019
Part of the analysis saw him take in the Owls’ home win over Luton Town at Hillsborough on Tuesday night and he was impressed by the quality of the squad at the disposal of Lee Bullen.
“They have good players,” he continued. “That’s the first thing you can see right away. I thought Luton, to be fair to them, played well in the first half. They kept the ball well, moved the ball well, had better possession and better territory, but the one thing you could always see with Sheffield Wednesday, was that they carried a real threat.
“They have pace of either flank; [Steve] Fletcher who is leading the line – and does great for them at this level – then they have [Barry] Bannan who floats around and pulls the strings from deeper, so they are going to be a real threat. We have to make sure that we try and perform as well as we have done at home and try and take the game to them.
“They have got experienced players. They are experienced campaigners at this level and it is just about tweaking them.”
But like North End he believes the opposition could easily change around their numbers to suit the needs of the game.

“I read what Lee [Bullen] said after the game [against Luton] and he spoke about changing the midfield, playing with one sitter and bumping other ones up and that seemed to have an effect on the second half and helped them. 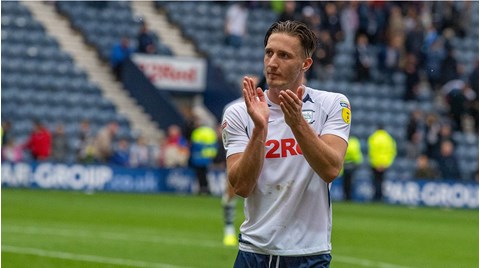 22 August 2019
“We know what they are capable of, they are not going to come with any surprises to us, it is just whether we can keep it quiet on the day and be at our maximum going the other way as well.
“They have played with inside forwards, with the likes of Reach in coming off the side and Forestieri dropping in off the side, but the two wide players have given them natural width, wanting to get to the byline - the goal they scored the other day came from Murphy getting to the byline and then standing the ball up, so the wingers add a different dimension, but I am sure Lee will be looking at the squad and deciding what he wants to do and the options he would use for this game,” added Alex.