Preston North End have completed the signing of Andre Green on a year’s long loan from Aston Villa.

The 21-year-old winger, who has played for England from U16 to U20 levels, made 22 appearances for the Villans last season, involved in both the Play-Off semi-finals and the Final victory over Derby County at Wembley. 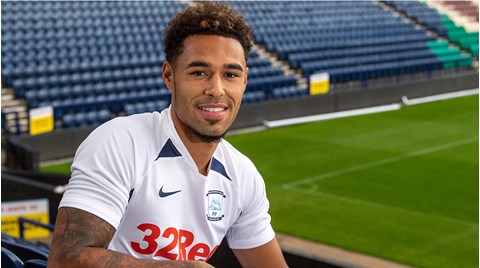 Andre Green Excited And Eager To Get Started

He will take the No.19 shirt at Deepdale, the same number as his shirt for his parent club and will be available for manager Alex Neil to go straight into the squad for the weekend’s Championship opener at Millwall, if selected.

Speaking after completing the paperwork on the deal he said: “I am happy I am here. I just spoke to the gaffer; everything is exciting and I can’t wait to get started and meet the lads.

“I had a good season in the Championship last year and I am excited to be here to bring that experience I have had into this team. The lads dealt with it really well last year and hopefully I can bring some extra power to the attack of the team and we can go somewhere this season.

“The gaffer has said he wants to improve me as a player. As a winger you can see what happened to Callum [Robinson] and how much he improved over the course of last season. He wants me to come away from this season as a better player than when I have arrived and more goals is what I need to add to my game and he is confident I can do that.”

Manager Alex Neil added: "Andre played the second half of season at Aston Villa in a team that was promoted. We are very hopeful that his directness, his pace and his creativity will add to our front line and that he will score and supply goals.

"The experience of being involved in an event the magnitude of the Play-Offs and the Final, in particular, will help to him spur him on to have more success and hopefully that will be with Preston North End."