Louis Potts, Lewis Earl and Tyrhys Dolan scored to see the youth team begin their Youth Alliance Cup campaign with a 3-0 away win against Bradford City.

The win seals three points for the Lilywhites in their first match in Group 5 of the competition, where each side faces one another once, with Nick Harrison’s team also set to take on Bury and Rochdale at home and Notts County away before the turn of the year. 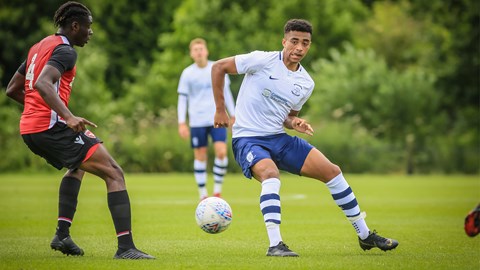 It was Potts’ header that got PNE off the mark in the competition for the season, with Earl also nodding home after the break and Dolan capitalising on a defensive lapse late on.

Academy manager Harrison made three changes from the team which lost to Salford City the previous weekend, with the incoming Harry Huddart, Aaron Bennett and Potts all providing an impact.

It was Huddart’s sliding challenge at the back to regain possession that saw the Lilywhites venture forward to score the first, with Kyi Nicholson’s cross from the right byline palmed by the Bradford goalkeeper into Potts’ path, who gratefully headed in almost on the goal line.

Another headed goal saw the visitors double their lead in the second half, with Ethan Walker’s left-wing free-kick picking out Earl at the far post to plant an effort back across goal and into the left-hand corner of the net.

Substitute Lewis Leigh then pressed high to win the ball back for Dolan, who found himself in acres of space in the opposition area after his team-mate’s intervention, allowing him to pick out the bottom left corner with an emphatic finish.

That completed the scoring as a North End side recorded another fine away win over the Bantams within the same month, following the first team’s success over the same opponents in the Carabao Cup first round.

Next up for the young Lilywhites is the short trip to face rivals Blackpool away from home back in league action. Details for the game will be confirmed later this week on @pnefcacademy on Twitter.