Preston North End captain Tom Clarke felt the team were lacking a creative touch in the final third during their 1-0 defeat to Millwall on the opening weekend of the 2019/20 Championship campaign.

Jed Wallace’s close range volley on 33 minutes proved to be the difference between the sides, despite North End’s best efforts in the second half. 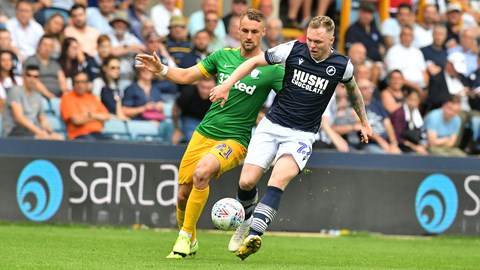 There were a couple of penalty appeals for Alex Neil’s side in that closing 45 minutes, but when speaking to iFollow PNE post-match, the 31-year-old stressed that the team could not depend on such incidents falling in their favour and that they needed to create more chances of their own.

“You can’t rely on them decisions, you need to create chances and take the game to them and we just didn’t do that.

“I thought we started the game well and put the pressure on – we had a lot of corners early on. We had [Alan] Browney’s chance that got cleared off the line, but we just lacked that little bit of quality when we got in good areas to kill them off.

“I think their only shot on goal really was the difference and that’s disappointing because we spoke about that before the game; how they played and we needed to be ready for it. It’s just disappointing that the game was there for us and we just didn’t take it to them.

“It was a game where we got in decent positions but didn’t really punish them as much as we did the last time that we were here [a 3-1 win in February of last season]. We knew that we could, but unfortunately the final pass just wasn’t going right.”

Clarke says he and his team-mates will be looking to improve in time for next weekend’s visit of Wigan Athletic to Deepdale, the Lilywhites’ first home game of the new season, both on the creative front and in defence.

“That’s the difference in this league [putting the result to one side]. Games come thick and fast and we’ve got another tough game at home in front of our fans and we’ll be looking to put on a better performance than we did today, create more chances and be more solid at the back.

“Hopefully the numbers come out, the fans come support us and we’ll be looking to improve and make sure it’s a better performance than today and get the result.

“You could hear them [the travelling PNE supporters] throughout and it’s just disappointing going home with nothing. We didn’t do enough in the final third, we needed to be more ruthless.”