Saturday’s trip to the Liberty Stadium sees a match official taking charge of a Lilywhites game for the first time in four years.

15 August 2019
The referee for the clash with the Swans will be Dean Whitestone, a Northamptonshire based official, who has refereed eight previous PNE games, going back over a decade.
His first was at Bramall Lane, back in October 2008, but his most recent was a goalless draw between North End and Bolton Wanderers on Halloween 2015, a Saturday evening game in front of the Sky cameras.

Two of the most memorable games he has officiated involved PNE were a 3-0 victory at Barnsley in early season – August 2009 – and a 3-1 triumph on the road at Doncaster in October 2012. 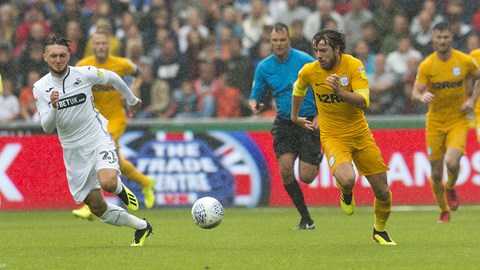 15 August 2019
It is also a while since he was the man with the whistle for a Swans game, the last being as far back ago as February 2011, when they were 2-0 victors at Bristol City; his last visit to the Liberty Stadium being a convincing home win over Scunthorpe in April 2010.
So far this season he has officiated one game, Queens Park Rangers’ 1-1 home draw with Hull City last weekend, when he cautioned seven players.
Running the line in South Wales will be assistant referees Mark Russell and Mark Jones, whilst the fourth official will be Richard Hulme.