Our fourth edition of the matchday programme sees Josh Harrop as the cover star and main interview, as he discusses his comeback with The One And Only.

26 August 2019
Features on the opposition, their manager, how they made it through to round two of the Carabao Cup, plus the manager’s notes and competition stats are just some of the features in the edition.
Speaking to the programme, Harrop said he will do what it takes to give him the edge after his injury nightmare – even if it causes his team-mates to have a laugh at his expense!
The midfielder admitted to doing some ‘fast feet’ in his garden on his day off as he continues his recovery from an anterior cruciate ligament injury he suffered last September against West Brom.
It led to the No.10 being sidelined for almost a year, along with team-mate Billy Bodin, and now he is keen to use all the time and resources at his disposal to make an impression.
“It was my day off and I was in the garden doing some fast feet,” smiled the 23-year-old former Manchester United player.
“The boys gave me banter over it, they gave me some grief as I put it on Snapchat, but I just want to try and be the best I can be, work hard and stay positive.”
The injury hit him hard, he has admitted to ups and downs throughout his time out, but says having Billy alongside him, who also suffered an ACL injury, helped him through – and they are still helping each other.
After scoring against Stoke City in the 3-1 win last Wednesday, his first league goal since September 2017, Josh was put in front of the press and admitted he was tired and just wanted to go home.
But he knows that six months ago, as he and Billy were recovering, he would have given anything to be the centre of attention and he has to appreciate it.
“A few months ago I was down and in dumps and only had Billy to keep me happy so I guess I have got to enjoy moments like this.

“Billy and I are top friends now, we are even in gym in the mornings doing activational stuff together, playing head tennis to warm up and we have a good connection. 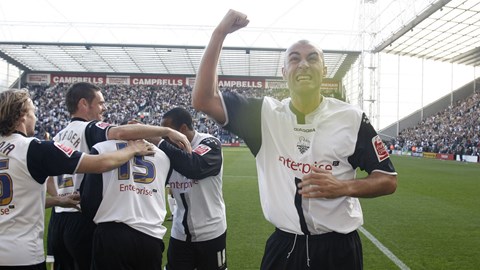 26 August 2019
“The last year has had its ups and downs, you have stages where you just want to play again and when you are watching the games, it can be tough.
“But for moments like scoring against Stoke, it’s worth it. The hard work you put in, the long hours, you look back and it was hard but I am over it now and happy to be back.”
There’s load more from Josh in the programme, on sale from Tuesday afternoon from the ticket office and inside and outside the ground on match night for just £2, make sure you pick up yours.