Two first half goals from Tyrhys Dolan and Aaron Bennett meant that a young PNE side comfortably beat Accrington Stanley, with Jacob Holland-Wilkinson adding a third just on the hour mark.

North End pressed fantastically throughout, and it was another positive performance for the team. The game was played at the UCLan Sports Arena but with PNE officially being the away side.

The Lilywhites dominated the game, having most of the possession and creating plenty of well- worked chances, while also defending resolutely when the visitors attacked.

Academy manager Nick Harrison made seven changes to team that started in the 9-1 victory against Port Vale last time out, with Connor Eastham, Kyi Nicholson, Tyler Williams, Ben Dooley and goalscorers Bennett, Holland-Wilkinson and Dolan all back in the starting eleven.

PNE started the game brightly, with Holland-Wilkinson looking to utilise his pace, getting in behind the Stanley defence, but unfortunately the goal didn’t come. Bennett also saw plenty of possession in the early stages, with him crossing the ball into the box from the right-hand side, but nobody in a white shirt was able to make a connection.

The Lilywhites’ strong attacking play came with a reward in the 14th minute. Holland-Wilkinson got on the ball again and tricked past multiple Stanley players, he found Dolan in the box and he shot first time past the goalkeeper and into the goal.

Holland-Wilkinson was again involved in another chance for North End, he muscled past the defence and passed out wide to Bennett who again crossed well into the box, but after a short scramble it came to nothing.

PNE pressed well when the visitors had the ball, Joe Nolan tackled strongly on the edge of the box and found Dolan in space, who shot at goal, but Stanley’s ‘keeper was out quickly to catch the ball.

Kyi Nicholson found time on the ball and broke quickly near the box, the defender crossed into the danger area but again Accrington’s ‘keeper was alert and caught the ball before it led to another chance for North End.

Minutes later, the second goal did come. The Lilywhites were pressing strongly and Nolan picked out the perfect pass to Bennett who was unmarked in the box, he shot strongly into the goal.

The third goal came straight on the hour mark, as North End were again pressing high on the Stanley defence. Brian McManus, who had pushed further upfield, provided a great through ball into Holland-Wilkinson, who shot past the keeper, and after hitting the post initially, he then delivered the ball into the bottom corner of the goal. 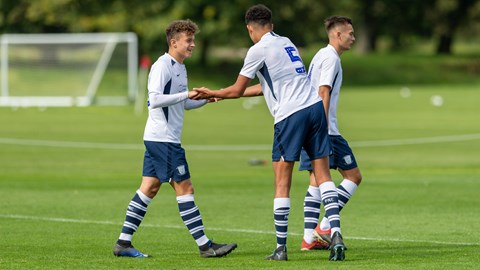 It was the forward’s fourth goal in his last two games, after his hattrick against Port Vale last time out.

There were three changes made early in the second half, with Louis Potts, Harry Huddart and Lewis Earl replacing Holland-Wilkinson, Dolan and Ethan Walker.

Substitute Potts then went on a fine run down the right after holding the ball up brilliantly under pressure, he passed into the path of Bennett who found his shot saved well by the ‘keeper.

The win extended the PNE’s unbeaten run to eight matches, with seven wins and one draw in that time, and manager Nick Harrison was impressed with the amount of chances his side created in the game.

Harrison made seven changes to the team that started the game against Port Vale last weekend, as he sees the games as opportunities for every player to get more minutes to their name and help them play their part in the team’s results.

“We’ve made a lot of changes in a lot of games this season, bringing players in, younger players in, players who may have not have had as many minutes, and today’s game was just another opportunity to do that. I was really pleased to see the impact those players made in the starting line-up.”

The mix of strong attacking play and resolute defending was showcased in North End’s performance, and the Academy manager also highlighted how happy he was with his defence keeping a clean sheet.

“We’ve scored three goals today and we’ve kept a clean sheet, that’s brilliant. We’ve played well and to create the number of chances that we did, to score the goals that we did and not concede is really pleasing.”