Preston North End manager Alex Neil felt his side did more than enough to get the points from their clash with Neil Harris’ Cardiff City in the Welsh capital. 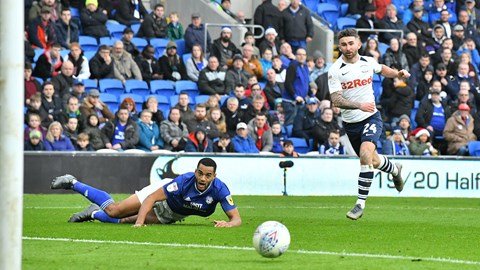 21 December 2019
However, in the end, they had to settle for a point, having been frustrated by Bluebirds goalkeeper Neil Etheridge in a game where opposite number Declan Rudd didn’t have a save to make.
“In Every Facet Of The Game We Were Better,” said the gaffer. “We controlled the ball better; we created more chances, more shots on target, we just lacked that little bit of quality and cutting edge at the top end, that the disappointing thing.
“I thought the lads got into great positions, worked really well, took it in, linked well, but it was that little finer detail – making sure you find the spaces and unfortunately today, that just wasn’t quite there.
“When you set up to win any game, if you dominate possession, have more shots and get yourself into scoring positions, much more so than the opposition, then you like to think that our quality would have come through and we would have won, but it didn’t and that is the disappointing thing, but I can’t fault the lads for effort in terms of how we carried it out, how we wanted to play – I thought we did that really well and really restricted them.

“I thought defensively as a unit we were excellent. It is one of those games where we take a point; we are frustrated because we weren’t far away from having the complete performance, but we probably just have ourselves to blame a little bit, as we didn’t take our chances.”

He had praise for returning skipper Tom Clarke and Sky Sports’ man of the match Ben Pearson: “He’s an experienced player,” he said of birthday boy Clarke. “Tom has been the captain since I have been here – he is an important part of our squad and he went in, did what he does, led by example, was strong, physical and you know exactly what you are getting from him. I had no problems with him coming into the team today.
“I thought it was Ben’s best game in a while. He is more than capable, in my opinion, of going in and dominating nearly every game that he plays in and we want to get that level of consistency from him every week. Today he showed people how good a player he is.”
And with a half-term report, after 23 games of the season now complete, the North End boss feels the team should be happy, but can still improve in the second half of the campaign.
“We would have been happy if people had told us we would be here at the mid-point of the season, but also we had a little blip in there where we missed quite a few bodies and I was disappointed we didn’t pick up some points in that spell and then today we were a little bit disappointed we didn’t win the game.
“When we play as well as we did, we need to be winning those games. However, I think we can put it down as a good first half of the season and we really need to kick on in the second half of the season,” he added.