Preston North End manager Alex Neil has reflected on the recent results and feels his side should head confidently down to the Kiyan Prince Foundation Stadium this weekend.

5 December 2019
Before previewing the trip to face Queens Park Rangers, the Lilywhites boss looked back on something else from Monday night, speaking to iFollow PNE for the first time about the Emirates FA Cup third round draw.
“I haven’t put a lot of thought into it yet, it is so far in the future,” Alex told the club’s online video service.
“There are a lot of games to be played between now and then, but it will be nice to meet up with some people who were there before and it will be a tough game.
“We have got a lot to think about before we get to then.”
Looking back on the last week Alex was still harbouring frustration that matters out of his players’ hands had cost them points in two of the last three games.
“It has been tough; we have lost quite a few players at the same time, albeit I don’t think any of them will be for any length of time, but in December when the games come thick and fast if a player missed two weeks, it feels like they are out for about three months, because of the amount of games that are there. We need to try and get them back as quickly as we can,” he continued.
“Against West Brom the lads did great. We were really unfortunate and that is now two games out of the last three that we have been on the wrong side of decisions that I don’t think have been the right ones. At Derby we had a goal disallowed that shouldn’t have been, that cost us at least a point and then the penalty on Monday cost us another point.
“That is really frustrating for us, because it does make a big difference in terms of perception, picking up a point and not getting beaten and where we sit in the table, because we probably would have been fourth if we had picked those points up.
“Every team has their spells where they do well and they don’t and at the moment we are finding it difficult to get all our players on the pitch and that is having its affect on results. We have been unfortunate and we just need to get back on track.

“As a group we need a bit of perspective about what we have done. We are sitting sixth in the league table, which is great and we just need to make sure we go to Queens Park Rangers and get another three points on the board and try and build from there.” 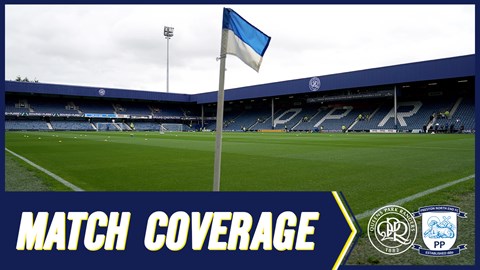 How To Follow The Game: Queens Park Rangers Away

5 December 2019
Looking at Mark Warburton’s side, and the opposition his team will face at the weekend, the North End chief feels they have some excellent attacking threats.
“They have used a back three for the majority of the season, but they used a back four on Saturday at Derby. We will prep for either system and I am sure Mark will look and decide what to go with, dependent on who is available, as will we.
“They have got good balance in attack. Nahki Wells likes to run away from the ball, he is quick; Eze is very creative, he gets into spaces and gets on the half turn and Jordan [Hugill], who we know really well, will lead the line and take the ball in and be a physical presence for them.
“The three of them are naturally their main threats; about 70 per cent of their goals have come from the three of them, so we know how much of a threat they are going to pose, but equally we have to do that going the other way as well.”
But looking back to the last trip to face the Rs, early in 2019, the Scot is hoping for a similar display, result and momentum creating effect to the 4-1 success in January.
“Last year was a big turning point for us. We really needed to pick up some points at that stage and that performance really turned us round and we started a really healthy run, particularly away from home, so let’s hope we can do the same again this time.
“I remember last year’s game vividly, particularly Jordan Storey’s goal where he put it in the far top corner right in front of our fans and we want to make sure we get back to winning ways.
“We want to put a good performance in; we have had quite a lot to content with of late and hopefully this can get us out of the end of that,” he added.