Preston North End manager Alex knows his opposite number at Luton Town well from their playing days up at Hamilton and he is looking forward to facing him as a coach.

12 December 2019
The Lilywhites’ gaffer spoke to iFollow PNE to look ahead to his side hosting the Hatters on Saturday and he says despite knowing the Luton boss as a player, it does not give him more of an insight into what to expect from a side he has coached.
“They have a similar type shape that they have been playing [to under the previous management], but, knowing Graeme really well, he is really flexible in terms of his tactics and his shape, so we will focus more on ourselves for this game, rather than too much on Luton, because they could rock up and play a variety of different formations or shapes and personnel, so we just have to concentrate on what we must do,” explained Alex.
“I knew Graeme more as a player than as a coach, but he has had an illustrious career as a coach and I am sure from when I met and played with him, I am sure his thoughts and processes have evolved a lot.

“I have not been at close quarters with him in terms of his coaching and we will just concentrate on what our own game plan will be.”

12 December 2019
His own team selections will be affected by playing in a game for 45 minutes on Tuesday night with only 18 outfield players on the pitch and with this being the third game in a week, the Scot will think hard before naming his team.
“Our physicals would have been really high and that’s something we need to take into account over the next couple of days for this game, but we are fit, we are athletic; the numbers we cover most games is very good and the win automatically makes you feel you can sprint another of times within the game and hopefully the win can provide us some momentum going into this one,” he continued.
“We will assess the squad; we have a couple potentially involved, who haven’t played recently, so we will have to monitor them over the next couple of days and see how they are.”
One player in with a shout of continuing to keep his place, is Paul Huntington, whose performances have impressed the PNE boss.
“Big Hunty has not been playing a lot of football, but I have a great relationship with Paul.
“I am sure he would have been frustrated that he wasn’t involved, but the best way to answer that is to come in play as well as you can and he has performed very well in the last two games.

“I say this to the players all the time, but football is a strange game, in that you can be looking as if you are not involved and out of the picture and then all of the sudden you are thrust into the limelight and you have to be ready to perform. 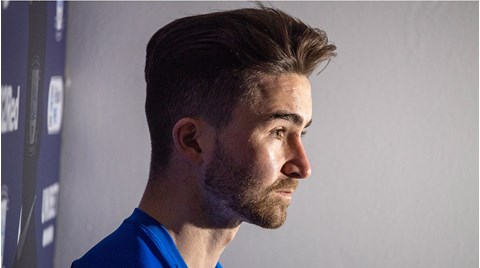 Sean Maguire: “It Will Be A Special Occasion”

12 December 2019
“What the last couple of performances have done for Paul, is to show his professionalism.
“He has stayed in good nick, he has remained positive, he has worked really hard and when that opportunity has come along, he has gone and tried to grasp it with both hands.”