Preston North End manager was delighted with his side’s latest three points, as their 2-1 win over Luton Town lifted them up to third in the Championship. 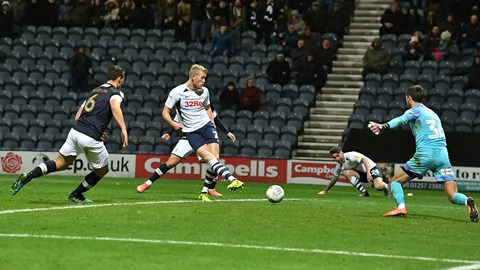 14 December 2019
The Lilywhites’ gaffer spoke to iFollow PNE after the game and felt that his side fought a difficult opponent and earned the win.
“You are going to win games across the season in a variety of different ways, and what we did was that we found a different way to win the game today,” he said.
“Luton made it really difficult. They sat in a deep block and after they got the equaliser we played into their hands by being too nice and precise with our passing, didn’t get in behind them and sometimes you need to disrupt it, be a bit more direct, a bit more pragmatic in your approach and I thought that when we got Jayden on, got the two wingers wide and through balls into the box, that certainly helped us.
“We were just hoping until that point that our quality would come through, because we got into good areas, but at times, our final ball and that little link up and that extra touch was just a little bit loose.

“At the end of the day, we are third in the league behind two top teams at this level, so I think the fans and the players should be nothing but proud with what we have managed to do so far.”

Having taken a fifth minute lead through skipper Paul Gallagher, the PNE boss had hoped the game would open up, but was disappointed with another controversial penalty decision against his team.
“I thought when we got the goal, we were going to go full steam ahead and get on top of them and really smother the game, but we didn’t,” he continued.
“We didn’t have enough runners in behind, they sat in a block and what that means is that they can hit you on the counter and one of the two they did have in the first half, they got the penalty.
“I thought the penalty was extremely soft; I have seen it back and I don’t think it was a penalty, but the referee had the opportunity to make the decision after a bit of sloppy play from us.”
But it was Alex’s substitutions that proved the difference and he felt that however it came, getting the points was all that mattered.
“I tried to force the issue. I played Josh [Harrop] as a technical ‘ten’, to see if we could play between the lines, but it was too tight and we changed it again. We went for more pace off the flanks and a target man down the middle to get balls into the box.
“There are a variety of different ways to win the game and as a manager you can’t be too precious about the way your team plays.
“Ultimately, my job is to try and win and we found a way to do that. Jayden got his goal and probably should have had another one right at the end – Tommy B did great down the right-hand side, but the most important thing was that we got the points,” he added.