Alex Neil described Reading’s victory over his Preston North End side as ‘a really bizarre game’, as first half goals from John Swift and Lucas Joao saw the Royals leave Deepdale as 2-0 victors, despite the Lilywhites dominating the play for much of the game. 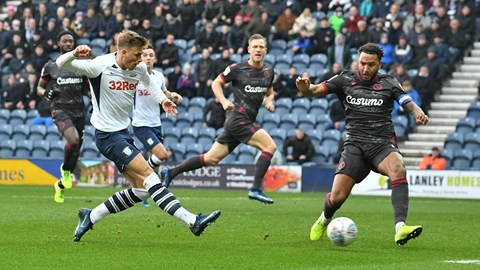 Swift and Joao struck within four minutes of one another, ensuring the visitors led by two just 16 minutes into the contest and despite North End creating a wealth of chances to close that margin, the early quickfire double proved enough for Reading to claim all three points.

The PNE boss still felt his side performed well on the day, though, and pointed out that his side could have been ahead even before Reading first struck – with Brad Potts denied by an excellent save from Rafael Cabral after just eight minutes.

“We just couldn’t take our opportunities,” Alex told iFollow PNE. “If we’re guilty of anything, it’s probably a little bit of sloppiness at times, in terms of losing the ball in that central area. Reading have had three attacks and scored two of them and one got chalked offside.

“It was a really bizarre game, I’ve been involved in a lot of games and for how they little they had, they carried a huge threat. For how much we had, we just couldn’t seem to convert.

“I think the game’s decided on goals, isn’t it? If we get the first goal, they have to come out and make it a game and then it leaves more spaces for us to exploit. They get the goal, they sit in and want to counter even more and we’ve really got to force the issue.

“Having said that, we had, what, 20 shots at goal? And numerous very good opportunites – I thought we’d scored before they got the first goal and that would have really changed the game.

“He didn’t know anything about it, did he [Cabral’s save for Potts’ chance]? He spread himself as good goalies do and he gets a little bit fortunate. Having said that, I thought he made some really good saves today.

“They really damaged us on those couple of occasions, which is frustrating for me, because I played with my back four intact really and the centre midfield player to try to guard against the counter attack really so we didn’t get exposed down the sides. Unfortunately, we still get done twice for the goals.”

Among North End’s other chances in the game was an early second half header for Tom Clarke, with Cabral somehow managed to prevent from crossing the line, with the ball looking as though it would squirm beneath him to halve the deficit.

The manager felt a goal at any stage could have changed the dynamic of the match.

"I think if you get that goal, even if there’s ten minutes left, it changes the dynamic of the game.

The manager also asked for the fans to stick with his players, heading into another home game with the New Year’s Day clash against Mid

“I think what the fans have got to do is stick with us as well. I could hear their frustration in the first half and understand we want to win the games, the lads are trying as hard as they can, but it doesn’t help when they’re getting agitated, shouting things and not supporting players, because players then get agitated and don’t really want the ball and it starts to become a bit more pressured for them.

“We want to try and help and support as much as we can because I don’t think anybody can say that we didn’t play well today, we didn’t try and we didn’t try to do our best to score. That’s all I can ask of them.”