Alex Neil was proud of his Preston North End players’ application as they earned a point with a 1-1 draw against Leeds United at Elland Road, only denied all three by a last-gasp deflected equaliser from Stuart Dallas.

Alan Browne had given the visitors the lead in a stunning first half display and there were additional opportunities for the Lilywhites to extend their advantage, having taken the game to their hosts, who occupy second place in the Championship. 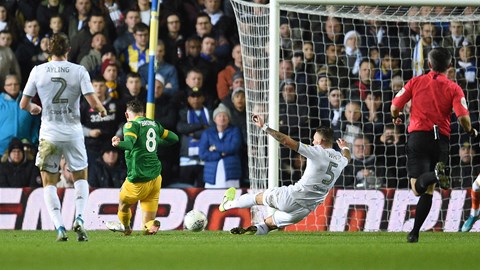 And when asked by iFollow PNE after the game whether he felt his side deserved more than their draw, the gaffer agreed that a win would have been merited based on the players’ collective performance.

“I think we did more than enough in the game, I thought the way we applied ourselves was excellent,” said the manager. “That’s twice now that people have spoke about Leeds in terms of being the top team and getting promoted and all the rest of it, and that’s twice that we’ve more than matched them.

“I thought first 30 minutes, there will be very few teams who have come here and done that to them, I thought we were excellent.

“I thought at the start of the second half as well we had some really good chances we didn’t convert and it took a deflected goal for them to get a point.

“We’re naturally disappointed and frustrated, but equally, I’m proud of players in terms of their application and the quality we had at certain moments.”

It was North End’s high-pressing style which saw them start the game so brilliantly, epitomised by Sean Maguire’s recovery of the ball which led to Browne’s opening goal.

Alex said that intensity was key in the game plan to deal with Leeds’ threat, adding that the quality which was evident in the deadlock-breaking strike was all that was missing in their last outing – the goalless draw away at Cardiff City at the weekend.

“I think that’s the little bit that we probably lacked against Cardiff – that next incisive pass. Tom [Barkhuizen] produces it tonight for us and Alan gets his goal.

“That’s something that if we’d done against Cardiff, we’d have won the game. We produced it tonight and we were unfortunate we didn’t pick up the points.

“I thought the fans really enjoyed it – they could see their team giving their all – and we’re just unfortunate we didn’t win.

“Against Leeds, it’s one-v-one battles all over the pitch. It’s going to be a game of transitions and you need to make sure that if you’re going to high press, you get it absolutely spot on, because if you don’t, they’re going to play through you and they’re going to hurt you.

“What you need to accept is at times they will play through and get an odd chance here or there, but providing that’s not more than the turnover we get at the top end of the pitch, as it wasn’t, that allows us to create more opportunities at the other end than them trying to hurt us.

“It was a real tough match, a real physical match, and I thought you could see that in the players – they were dead on their feet at the end of the game, but it’s because they’ve given their all and you cant ask for any more than that.”

With the intense nature of the Championship campaign showing no signs of stopping – North End will welcome both Reading and Middlesbrough to Deepdale within the next week – the manager admitted changes may be required to keep his side fresh.

“We’ve got two days before the next one, then a game, and then another two days,” he added.

“It’s just a case of getting them back and we’ll probably have to a little look at a couple of things for the next couple of games because after the physical demands of tonight, we’ll need to look at probably freshening the team up a bit.”

Watch Alex’s post-match thoughts in full now by clicking the video above.