Preston North End’s Whites Christmas campaign has concluded after multiple visits to deserving people in the Preston community over the last month.

A total of 23 first team players were out in force across the local community with special visits to those who have gone through tough times or made an outstanding contribution for their family, friends or others in the local community.

The campaign began when young supporter Alfie Martin was the subject of attention in his school assembly, at Brownedge St. Mary’s Catholic High School.

Alfie had organised and completed a whole host of fundraising events to raise money for his disabled cousin William’s ‘Team William’ fund, including a 26-mile walk from Blackpool to Preston.

As a reward, he was joined at the front of the assembly hall by Paul Gallagher, Daniel Johnson and Darnell Fisher, before the trio took to a quieter setting in an exclusive Q&A opportunity for Alfie. The first team squad also made a £300 donation to the cause. 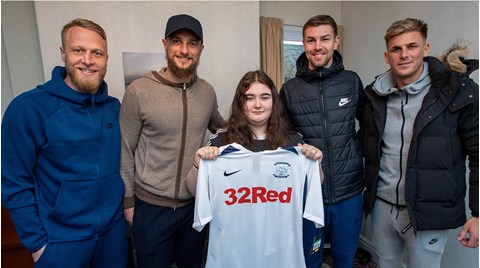 Next up, Michael Crowe and Sean Maguire went to see some more young, PNE-supporting boys, presenting them with North End scarves, balls and hats after they had gone through a tough few years.

It was then the turn of Declan Rudd, Tom Clarke, Paul Huntington and Brad Potts, who visited another young fan in Andrea Hoctor, who had sadly been bullied at school.

She was given a new home shirt by the Lilywhites quartet in a visit to her home!

Following that, Ben Davies, Ben Pearson and Josh Harrop went to surprise Holly Illing at her home. Holly had suffered multiple losses in her family over the last few years.

Despite that, she continued with her University studies, earning a first-class degree while remaining helpful and reliable to family and friends. She was gifted a sign shirt as a reward for her selflessness.

In addition to the many visits that were made to people in the community, there were also two mascot packages gifted for the home matches against Fulham and Luton Town. 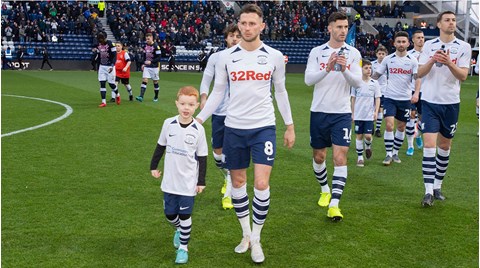 Rex Rewarded With Mascot Package Thanks To Whites Christmas

The visit of the Cottagers saw Joe Fry given the chance to meet the players in the dressing room before walking out with them at the start of the match, which was live on Sky Sports.

Joe was nominated for a special surprise by his father, Phil Fry, who couldn’t praise his son enough for the help he provides him with for his mobility problems, as well as his support for other people when attending PNE games, both home and away.

When Luton came to town, it was another young boy in Rex Wright who had the chance to become mascot for the day.

Rex unfortunately broke his collarbone, meaning he was unable to take part in football or his normal sporting activities, which also include swimming and taekwondo.

He enjoyed a ground a tour and a visit to the dressing room to meet the players before the game, later walking out for kick-off with Alan Browne.

Between the two games, there had been three more visits to deserving locals in Preston.

Joe Rafferty, Matt Hudson, Ryan Ledson and Tom Barkhuizen visited Lilywhites fan John Patterson at his house after he was nominated by his son Sam.

John had endured troubles with his health over recent years, preventing him from attending games at Deepdale. The quartet surprised John with a hamper, provided by the club’s catering partner Heathcote&Co, containing a collection of Christmas treats. 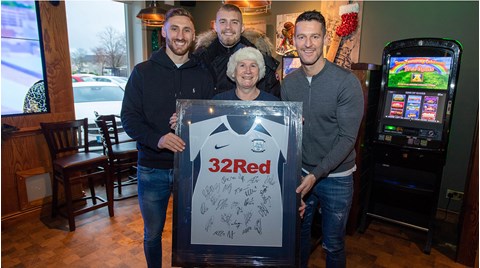 PNE’s walking footballers had planned their Christmas party in the meantime, but it was safe to say they hadn’t expected a gatecrashing from David Nugent, Louis Moult and Connor Ripley.

The trio made the visit to surprise Jo Harwood. A walking footballer herself, she was nominated because she had been caring for her husband, who sadly suffers from dementia.

Nominated by one her former team-mates, Jo was presented with a signed shirt by the North End trio, which was kindly framed by The Framing Guru.

There was also a hamper provided by Heathcote&Co for Eric Taylor, who was surprised by Andre Green, Billy Bodin and Tom Bayliss at Brookside Care Home.

Eric was nominated as part of Brookside’s ‘Wishing Washing Line’ project, as he has been unable to attend matches at Deepdale because of his declining health, although his love for the club very much remains. 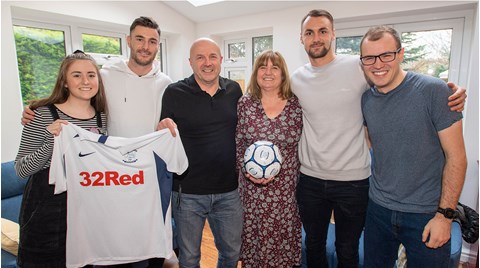 Mark Allen’s Heroics Recognised With Visit From Bauer And Hughes

In the final visit, Patrick Bauer and Andrew Hughes surprised Mark Allen at his house with a new PNE shirt and a signed football.

Mark was nominated by his daughter Georgina, having conducted life-saving CPR on his wife Katherine back in August, after she suffered a cardiac arrest.

Katherine has since made a remarkable recovery and the family have returned to watching the Lilywhites in action.

Finally, the entire first team squad made their annual visit to the Royal Preston Hospital, visiting children who are currently being cared for.

Players handed out bags of PNE goodies that contained a signed photo, a selection box – kindly provided by local firm HGS – a scarf and tickets to a PNE game, among other PNE gifts, all the while spreading plenty of Christmas cheer.