Youth team forward Jacob Holland-Wilkinson is happy with his recent performances and fine goalscoring run after another victory for the young PNE side, extending their unbeaten run to eight games.

Tyrhys Dolan and Aaron Bennett scored in the first half of North End’s victory over Accrington Stanley, and Holland-Wilkinson got the third and final goal of the afternoon on the hour mark. 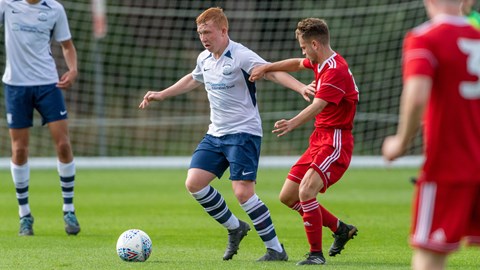 It was the forward’s fourth goal in just two games, after he scored a 20-minute hattrick in the previous game against Port Vale.

“I’m definitely pleased with my performances”, he told PNE.Com. “Every goal is adding up now and it’s just about scoring more every time and when the chances do come to me, putting the ball in the back of the net and being clinical.”

Nick Harrison’s side controlled the game fantastically against Accrington Stanley; the combination of high pressure build-up play and composure when defending set the squad onto a deserved victory.

North End dominated the possession and Holland-Wilkinson thought more goals could have been scored for the Lilywhites.

“We kept possession well and we did control the game from the start, I think that’s a good confidence builder.

The win was North End’s fifth in a row, with the team being unbeaten since October and having scored 19 goals from their last four games.

This fantastic run is building the players’ confidence, meaning they will go into their next match against Bristol City in the FA Youth Cup in superb form, something that Holland-Wilkinson is enjoying.

“The confidence in the squad is really high now, after a 9-1 win last week and a 3-0 win today I think it’s getting higher and higher, and getting better and better the more games that come.”