Preston North End full back Joe Rafferty believes just a goal or a little bit of luck can turnaround the recent run of results.

9 December 2019
Speaking to iFollow PNE to look ahead to the clash with Scott Parker’s Fulham, ‘Raff’, who started in his more familiar right back for the first time this season at the weekend, said: “This season it was my first start at right back and it felt a bit weird at the start, but it was good to play there.
“Sometimes when things aren’t going for you, it doesn’t fall into place, but that’s football.
“When things are you get might get the decisions and bits of luck in the game, but that isn’t the case at the minute, but hopefully it will turnaround soon.

“I would take a goal tomorrow night coming any way and a little luck like that can swing the momentum into our favour and that is what we are hoping for.”

9 December 2019
Fulham also arrive feeling a little aggrieved; like the Lilywhites in the last two games, they suffered penalty controversy at the weekend.
“I saw the highlights from their game and it looked like it could have been a penalty at the end, but they didn’t get it,” continued the North End No.15. “But they are a brilliant team, a Premier League team playing in the Championship, with some good players and we are going to have to go out there, work as hard as we can and get a good result.
“You have to play against every team in the division and you want to play against the teams at the top, as well as those at the bottom.
“It will be a good test for us and we have to go out there, do our best. Just because they are a good team, we still believe we can win the game and hopefully our best will be good enough to give us the win.

“I know we haven’t done too well the last few games, but we had such a brilliant start that we are not in a bad position. 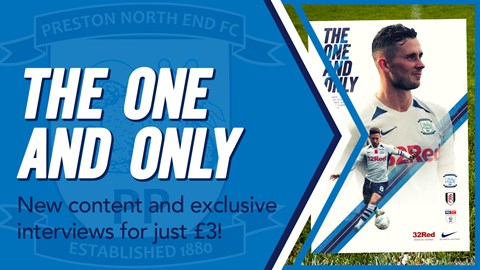 9 December 2019
“If we were down at the other end of the table, we would be in a terrible position, but we are not, so one win will send us up a place or two and then we will be back to the way it was.”
And the Scouser believes that with two matches at Deepdale this week, it could provide just the tonic the team need to get the win.
“Two home games in a week is a brilliant opportunity. We have been great at home. We obviously lost against West Brom, which was a bit unfortunate, because we did quite well, but it is a good game for us, a good test and then we move on to Saturday.
“We just have to play as well as we can, apply ourselves the way we do in every game and we should be okay. We want the three points; we believe we are good enough to get the three points and as long as we do things right, we believe we can get it,” he added.