Mark Allen was too humble to realise that he was reason that Patrick Bauer and Andrew Hughes arrived unannounced on his doorstep earlier this month.

Admittedly, it was his daughter Georgina’s 21st birthday that day, leading Mark to believe that the North End pair had visited to surprise her. 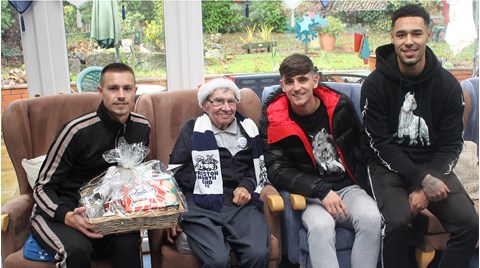 On the contrary, Georgina had nominated her dad to be the recipient of a PNE themed surprise – as part of the Whites Christmas campaign – having conducted life-saving CPR on his wife, Katherine, in August of this year.

Katherine spent two weeks in a coma thereafter, but has since made a remarkable recovery, in part thanks to the help of Mark, having conducted CPR for around five to six minutes before ambulances arrived at their home.

Bauer and Hughes came to visit to hear the tale of Mark’s heroics from his wife Katherine, daughter Georgina, who made the nomination, and his son Dom.

On hearing how Mark helped to save his wife’s life, PNE defender Hughes said: “Explaining the story in there to all of us, it really hits home with how lucky we are just to have health.

“When you see it on TV, you just never think it’s going to happen to you. Unfortunately, it did [happen to Katherine], but luckily her husband was there to be the hero.”

Georgina felt that her dad was deserving of a special surprise, not only for his heroic actions, but for staying strong in the aftermath with the rest of the family as well.

“My dad has had such a tough year this year and we’ve all had a tough year, but it would have been a lot more difficult without what my dad did in saving my mum’s life after she had a cardiac arrest,” she said.

“We come to your house every weekend, so for you to come to our house, I just can’t describe it. It’s nice to meet the players and get to know them as people, to realise that they have personalities.

“It just feels a lot more personal now, even though it has always felt somewhat personal.”

Mark’s wife Katherine said her recovery has truly been a miraculous one thanks to Mark’s quick-thinking.

“It’s been a miracle; every time I see a new health professional, they look at me with shock or respect even – that I’ve managed to have such a fast response from Mark.

“Mark truly saved my life. If he hadn’t responded so quickly, I might be alive now, but I might be in a very bad state; they might be feeding me, I might be in a wheelchair. I have some amnesia, but other than that, nothing is wrong me.”

Ever the humble one, Mark himself stressed that his thoughts on the night were solely focused on trying to help.

“I just did what hopefully anybody else could do,” he said.

Hughes added: “As a player you are pretty close to the fans, but it’s not until you go and see them, up close and personal, of how close and how much it means to the fans as well, so that was nice to see.”