Preston North End’s Academy manager Nick Harrison felt his side were thoroughly deserving of a place in the fourth round of the FA Youth Cup after an impressive and dominant display against Bristol City at Deepdale on Monday night. 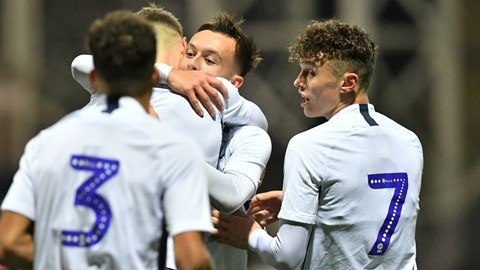 16 December 2019
Speaking to iFollow PNE after the U18s progressed with a 2-0 win over the Robins, thanks to impressive finished in either half from Joe Nolan and Jacob Holland-Wilkinson, Nick said he was ‘proud’ of his players.
“First and foremost, it is about the result,” he said. “Obviously, I am delighted with the result and I thought the performance was very good as well. I am really proud of the players.
“I thought the game probably should have been done and dusted at half-time. I thought we created a number of chances and just needed to be a little bit more composed in front of goal.
“It could have been two or 3-0 at half-time. I thought the lads showed great courage really to go out in the second half and protect the lead. We had to work hard for it and obviously get the second goal which made the game a little bit easier.”
The goals his team did score were exceptional and he was pleased with the quality from the team.
“[Joe Nolan] doesn’t score many,” continued Nick. “The last one he scored in the league [against Accrington Stanley] was an unbelievable one as well from outside the box.

“I just thought he anticipated it really well to get on the end of it and it was a great finish with his left foot.

“Lincoln [McFayden – who provided the assist for the second] said he meant it. It was a good ball into the box which caused a problem and it was just an unbelievable finish from Jacob. He worked his socks off all game and thoroughly deserved that goal.
“[Jacob] was nearly coming off at one point, because we saw him stretching with cramp. He always puts a lot of work into every game. But thankfully we didn’t bring him off because it was an unbelievable finish.”
Having dominated the first period, but only coming in one ahead, the youth team staff knew the opposition would come at them, so what was the information given to the squad at the interval?
“The message [at half-time] was just to keep going. We felt that we had created lots of chances, we just needed a little bit more quality in front of goal and that’s all we said.
“We said that they would come at us and I thought they did. I thought they were a real threat in the second half and they caused us a couple of problems, but we should expect that.
“Bristol City were 1-0 down, but I thought our lads did really well to defend and to protect the lead. Also, when a team comes at you it opens up spaces to go and attack which it did.

“We probably could have ended up with a couple more towards the end. I’m delighted to keep a clean sheet and I’m delighted with the two goals.

“We probably could have scored more so I think that speaks volumes in terms of how the players played and worked together in pairs and in threes.
“I really thought when they had the ball that we made it really difficult for them and forced them into errors. Obviously, we created a number of chances on the back of that.”
And now they have a break, with the new year beginning with the mini-derby versus Blackpool, a cup tie against Walsall and the next round away against either Oxford United or Maidenhead United; something to consider over Christmas.
“It’s something to look forward to. We’ll get the players in to have a bit of a warm down and look at the video, maybe look at a few things we can improve on next time.
“We’ve just got to keep getting better and better. That’s the message to the players,” he added.