Ben Pearson has called for Preston North End to retain their confidence amid the up and down nature of the Championship campaign, after losing 2-0 to Queens Park Rangers at the Kiyan Prince Foundation Stadium. 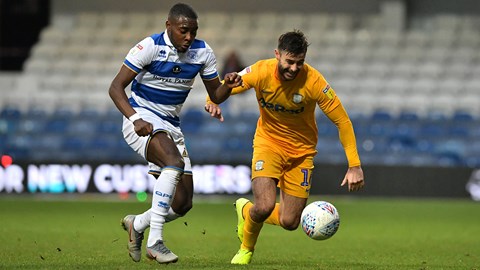 Ebere Eze scored in either half as the Lilywhites suffered a fourth defeat in a row and Pearson admitted to being disappointed with the result, despite having some contention with the hosts’ second goal, which came from the penalty spot.

But speaking to iFollow PNE in the capital, the North End No.4 stressed the need not to become overly downbeat after defeat – and conversely, not to lift spirits too much after a win.

“I think that the first goal’s partly my fault, I think I’ve got to track the runner better, and also we were wide open at the same time so it’s never good to get off to a start like that. The penalty is a sucker punch and it’s hard work when you go 2-0 down with probably 15 minutes to go.

“I think we’ve all got to stick together, this league is up and down throughout the season and you can win a couple and you can lose a couple on the bounce – it’s just about keeping that confidence and not getting too down about it.”

The bone of contention with the hosts being awarded a second half penalty appeared to be that the referee had not seen the incident which saw Marc Pugh go down under Declan Rudd’s challenge in the box, as Pearson explained.

“I think what I’ve said to the ref is ‘Go and speak to the liner’, and he said he hasn’t seen it, but what I don’t understand is why go to the liner if you’ve seen it.

“If the liner hasn’t seen it and the referee has, why has he given it? That’s the issue I’ve got with it. I think if he says straightaway he’s seen it, then you never go to the liner and you can’t complain.”

Substitute Billy Bodin saw a fine strike of his well saved moments before the hosts’ second goal and Pearson added that moments like that are not currently going in his side’s favour.

“I was right behind it as well, it was hit with some power and near the corner, it was a good save by their ‘keeper.

“Little things like that aren’t going our way at the minute; probably the first two months of the season, they fire into the net and at the minute, the ‘keeper is saving them.

“Decisions like penalties, we’re not getting the rough with the smooth at the minute and they’re sort of getting all the little decisions that maybe when you’re on a good run you don’t get [against you].”

But repeating the mantra of not overly dwelling on a disappointing result, Pearson looked ahead to Tuesday’s return to Deepdale to face Fulham as an opportunity to find a spark that can reignite the Lilywhites’ fine form from the start of the campaign.

“I think we never get too down when you’re getting beat. I think it’s a long season; you’re going to go through spells where you lose a couple, win a couple, and it’s not to get too confident either.

“You can’t make excuses, but we’ve got a lot of players out at the minute, players who have played a lot of games for us since the start of the season, so I think that’s a factor.

“Losing a couple of games, your confidence does dip, subconsciously it does become difficult. I think all those factor into reasons as to why we’ve struggled, I think we’ve just got to have maybe that little bit of luck, that spark to kickstart us again and get a bit of momentum and obviously on Tuesday we’ll be looking to do that.”

Watch more from Pearo by clicking on the video above.