12 December 2019
The Lilywhites’ No.24 spent the first couple of months of his life in Luton and still has a whole host of family living in Bedfordshire town, as he explained when he sat down with iFollow PNE to preview the game with Graeme Jones’ side.
“Many people don’t perhaps know that I was born in Luton; I lived there for a couple of months before I moved back to Ireland,” said Seani. “I still have a good number of family in Luton – Aunties, Uncles and my Nan still lives in Luton and she is actually coming up to the game on Saturday for the first time in a long time to see me, so it will be a special moment for me for my family to see me.
“I have a lot of family coming over from Ireland as well, as my Mam was born in Luton too and it will be a special occasion for myself.
“Growing up I went to a lot of Luton games, I saw them play numerous times and it won’t be the first time I have come up against them, I played down at Kenilworth Road when I was at Accrington.
“It is a business game and we will be looking to go into it and get the three points that push us up the table.
“I have quite a lot of people coming to the game and quite a few are Luton fans, so I am not sure if they are going to be with the family who are supporting me or in the away end! But I am sure they want me to do well, it is just from three o’clock, we won’t be family for those couple of hours!

“We will be looking to win; they are at the bottom end of the table, but they have some players that can hurt you and they have shown that a good few times this season, so we will have to do what we did the other night and hopefully get the three points.”

12 December 2019
Tuesday night’s excellent 2-1 win over fellow promotion-chasers Fulham saw Maguire score the opener and he was delighted with the confidence boost and also to break the recent run of results.
“The gaffer mentioned that most, if not every team, is going to go through a rough patch in this league and hopefully that was ours which can now be pushed to the side,” continued the former Cork City man.
“I think the other night was a massive confidence boost, not only for myself, but also for the team.
“I felt I have been doing okay of late - we obviously lost four in a row, which isn’t great, but having done that we are still sixth in the league, which shows how good of a start we have had and I am sure every fan would have taken this spot at this stage of the season when it started, especially coming up to Christmas, where we have a lot of games and things can chop and change.
“Come January, when all these games are done, we want to be where we are now, in the top six.
“You only have to look back to last year when we were bottom of the league after 12 or 13 games, but up until March we were on level points with the Play-Offs, so if you can go on a run, anyone can make the top six. Luton for example, could go on a run and soon find themselves in the top half of the table.

“It is a very open league; probably the most exciting league in the whole of Europe and that means there is no easy game and you can’t go into any thinking it will be a stroll in the park. 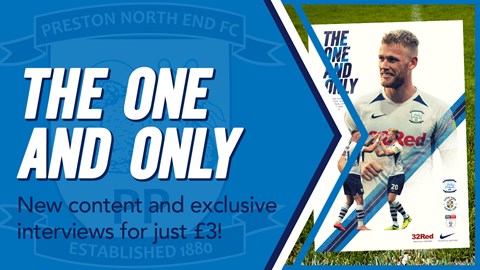 12 December 2019
“We will assess each one game-by-game and Luton will be a tough one, but one we feel that if we are going to make the Play-Offs, then we should be winning.”
And with this the final home game before Christmas and before the season’s mid-point – after next weekend’s game at Cardiff City – the 25-year-old feels everyone should be proud of the home form thus far.
“In the game [against West Bromwich Albion] we had a few chances – including myself – to win the game and we deserved to at least come away from the point, but controversially we didn’t.
“Our home form has been one of the best in the league and we can take a lot of pride and a lot of confidence from that and stride forward.
“We will be heading into the Luton game with a lot of confidence, looking to stay in the top six and get the three points.”