Preston North End midfielder Alan Browne says the squad are setting themselves new levels of expectations after moving back into the top half of the Championship.

The Lilywhites moved back ‘above the fold’ for the first time since August after picking up seven points from a possible nine available last week.
And whilst it was a demanding few days for the No.8 and his team-mates, the Irishman feels that there will be a freshness in the legs when they return to action against Millwall on Saturday.
“It was a pretty intensive week last week, but I think we came out of it in a lot better position than when we went into it, which is obviously pleasing for us,” he told iFollow PNE.
“The games took it out of us. You could tell by our performances throughout the pitch on Saturday, in the game against Nottingham Forest, that we were drained – mentally and physically – and to come out of it with a point was pleasing given the circumstances.

“It is hard to keep the physical levels up and maintain them after a tough week – it was probably the toughest period we have had so far this season. They knew we were tired, we knew they were tired and, unfortunately, we couldn’t capitalise on it, but all in all, a point isn’t so bad. 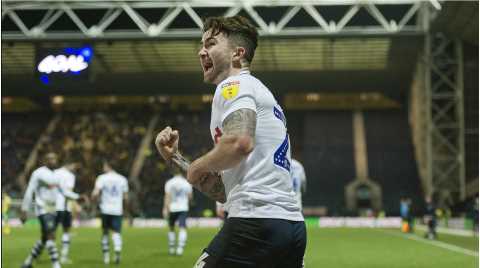 Sean Maguire: “It Is All About Building Momentum”

19 February 2019
“The next couple of weeks are a chance for us to recover and get the legs ticking over again.
“The gaffer gave us a couple of rest days and now we get back to business and will be fresh for the upcoming games and there’s no reason we can’t replicate the performances we have been showing over the next couple of weeks.
“We have set our expectations a lot higher than they have been so far this season. From now until the end of the season we want to put on performances like we did against Norwich last week and hopefully we can continue that until the end of the season.
“If you win a few games on the bounce in this league, it can take you anywhere. It is pleasing for us to get into the top half, but now it is about staying there and climbing even further up the table.
“It is a tough ask to keep on climbing, with the teams above us having games in hand, but we will keep an eye on it, just keep putting in the performances, like we have been doing, and see where that takes us.”
PNE will look to make it four straight away wins at the New Den this weekend, but the 23-year-old is under no illusions as to how tough it will be, even with Millwall’s extra Wednesday fixture thrown into the mix.
“Having had the week we had, last week, we know it is going to be a tough week for them,” Alan continued.

“We will need to go there and make sure we do everything we can to make them feel like we did on Saturday.

“It is a great chance us, considering they have had a run of games and have another in the week. We will possibly have the edge physically, as well as mentally, because it does take a lot out of you. Your whole days are based around recovering and trying to get ready for the next match – so it does take it out of you mentally and we will be looking to go there and capitalise on that.
“I haven’t seen many teams win four on the bounce away from home. Even to win three on the bounce – home or away – is really tough in this league and I think everyone is aware of that.
“We will be going there in good spirits, looking to get another three points.
“The fans been fantastic away from home, as well as at home and they seem to enjoy away trips a bit more. Hopefully they can travel in their numbers again, as they have been doing, get in good spirits and see us through the game.”