The beast from the east may well have been raging and fans were well wrapped up on the terraces, but the Lilywhites put in a performance to warm the hearts on their last trip to Bolton.

6 February 2019
Second half goals from Tom Barkhuizen and a brace from Sean Maguire, on his return from injury, gave Alex Neil’s Lilywhites a 3-1 win, at what is now the University of Bolton Stadium and the PNE boss says that was one of his most memorable days so far as manager of the club.
Speaking to iFollow PNE ahead of the clash with Phil Parkinson’s side, Alex recalled fondly the 2018 Gentry Day: “As soon you mention that game, my memory goes back to last year, when it was Gentry Day and it was probably one of my most pleasing days since I have been here – I really enjoyed that game,” he said.
“I enjoyed the way we played, I thought the fans had a great day; they were very vocal and in their bowler hats and the rest of that sort of stuff. It was a first for me, as I had never really come across that before, but more importantly I was so pleased with how the lads went about their work that day.
“Subs came on and had a real impact on the game and it was a great game for us. We played very well in the first half, but they scored from a set piece where [Mark] Beevers headed it and it dropped for him and he put it in and at that stage you know you are a bit hard done by, because you have played well, but you have work to do. You need to make sure that you go and turn the game around, but we never waivered in our belief that we were going to break them down and get a goal and once we got the first, I was really confident that we would go on a win.

“It was a great performance. I remember Gally and Ben Pearson dictating the ball in the middle of the pitch and with Callum, Seani coming on as a sub, Tommy B, we had a lot of really good performances and we are very hopeful we can try and get to that kind of level again this weekend.”

7 February 2019
This season’s game, to be played in front of a sell out away following of over four and a half thousand, is one that the North End gaffer is expecting to be a tough game, having seen a couple of the Trotters’ recent home games.
“I know Steve Parkin, he was my coach when I was at Barnsley, and I have met Phil a couple of times and the one thing they are is gritty,” he continued. “They will dig in, they will fight and scrap – they will certainly make it a difficult match for us.
“We are going to have to be at our best and we are going to have to more than match them physically. We are going to have to match sure we match their levels of effort and hopefully, if we can move the ball as well as well as we can, then we can create opportunities.
“They will keep working away, but it must be difficult with the uncertainty; people not getting paid and you then spend most of your time managing things that have nothing to do with football. I am sure when a Saturday comes for Phil he will look forward to getting stuck into football, rather than worrying about his centre forward that is saying ‘I can’t afford to pay my mortgage this month because I have not been paid’.
“It is not a good situation to be in and the fans have been very vocal about it recently. I have been to a couple of game very recently and the fans were making themselves heard and they will be frustrated, because Bolton is a big club and they will be wanting to get out the end of this, get back to normal and hope everything straightens itself out.”
The Lilywhites’ away form has been excellent of late, with the team looking to record their third consecutive win away from Deepdale, but it not just a case of getting a result for the manager – he wants an entertaining performance to go with it.

“We have got a lot of our players back and we have recruited very well in the window and we have become more difficult to beat. 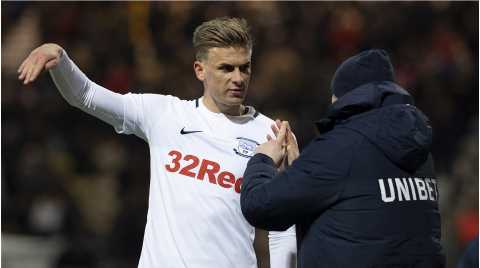 7 February 2019
“We have got two clean sheets in the last two games, but we have continued to carry that attacking threat and that is always a key balance. We have scored a lot of goals this year – we are in the top five or six goalscorers in the league, but we have conceded too many.
“The one thing about me, is that I want my team to play entertaining football. I am not happy to scrap out a 0-0 or a 1-1 or whatever. Take the Swansea game, for instance, I wasn’t happy; I didn’t think we played well enough. I thought we turned the ball far too much, we didn’t have any composure and we got a decent result, whereas, we lot at Rotherham, but I thought we played miles better and it getting that balance between playing well and winning – because I am not here to play well and lose.
“I want to win, but I think you have a duty to the fans and the club to make you players better and I think the way to do that is to try and perform; to pass and to move and to try and create chances.
“I think at the moment we have a really good balancing. We are scoring goals, looking threatening and looking defensively solid, competing very well and we are looking to try and continue and even improve on that,” he added.