Preston North End manager Alex Neil believes his side will again need to reach the very peak of their form if they are to make it three wins in a week against Martin O’Neill’s Nottingham Forest at the weekend.

14 February 2019
The Lilywhites boss spoke to iFollow PNE to preview the clash with the Reds and he feels that the former Republic of Ireland boss has got his new charges organised and has a number of talented and experienced players at his disposal.
“They are a different type of team to what they were earlier in the season,” the gaffer said.
“Aitor [Karanka] had a lot of rotations, a lot of wide players rolling in, full backs getting high and wide, whereas Martin – from the games I have watched and bearing in mind they were against West Brom and Brentford, whoa re two very expansive teams – has them really structured, getting in their shape, playing from their shape, closing the lines off and then hitting you on the counter.
“They can come and approach the game in any which way that they want and they have the players to do so. They have Lewis [Grabban] up top; they have [Daryl] Murphy if they want a target man and they have a lot of players in the middle of the pitch who have played in the Premier League for the majority of their careers.

“It is going to be a tough match for us. We will have to perform at our very best levels in order to win the game and also to try and keep this run going, because it has been a really good run for us.”

14 February 2019
Going into their third big game in the space of seven days, the manager is not woriied about his side’s physical levels, but says they must be switched on mentally, if they are to make it nine points from a possible nine in the week.
“The mental side of the game, I would probably deem as the most important,” he explained. “Physically you can be there, but mentally, if you are not there, your physicality doesn’t matter.
“You have to be able to apply yourself properly, be concentrated, be focused and therefore this is the biggest test out of the three [games this week]. Not because Norwich and Bolton weren’t difficult tasks, but when you are fresh emotionally and when you are fresh physically, it makes a difference.
“We went to Bolton and we were ready; going into Norwich, we knew the task at hand, meaning we could raise our game and really get after them and go for them. It is now about how we respond after that, in terms of can we get to those levels again? Can we get there physically and can we get there mentally?

“This will be a real test for us. We are going to have to look and see who has any knocks and bumps and I certainly think it might be one where we have to freshen things up a little bit.” 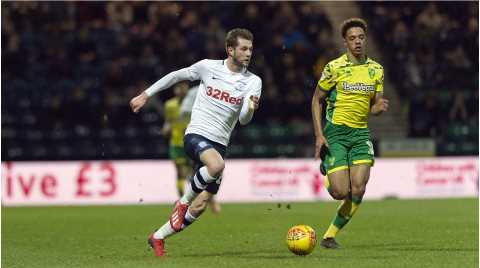 Tom Barkhuizen: ‘The Best In My Time Here’

14 February 2019
However, whatever team the manager puts out, he wants it to continue to entertain, which is has certainly done of late.
“Prior to me arriving here, Simon [Grayson] did a marvellous job and I have come in with a real platform to try and build the club. But I have to try and build it in my image and how I want things to be done and I think the most pleasing thing that we have done is that we are expansive now. You just have to look at the goals we have scored this season; that has not been synonymous with Preston North End in the last few years.
“We are now a team that if you sit in behind the ball and you give us the ball – which I think in the past has been a bit of an issue for us – we can now pick you a part. I think if want to go toe-to-toe, we have the legs and the energy to run over the top of you, so I think what we have done is to add extra strings to our bow.
“Before we were well-organised, got behind the ball, hit teams on the counter, relied on set plays a lot, but at the end of the day it is about results. If that is the way you need to play to get results, then there is no shame in that whatsoever.
“But what I have said on numerous occasions, is that if I go to watch a game of football, I want to be entertained. That’s what we are in it for, isn’t it? We want to be entertained – we don’t want to go thinking ‘let’s hope we can scrape a 1-0’; and that is my most pleasing thing.
“The way I describe it to people, is that if I had to watch the game in black and white, I should be able to watch them and say ‘that’s my team’ and no who they are without being able to see them and I think I could do that at the moment.”