Preston North End manager Alex Neil took to the road on Tuesday night, making a trip to the south west to see next opponents Bristol City in action.

Lee Johnson’s side put on a spirited second half comeback against Birmingham City at Ashton Gate, but could not recover from going 2-0 behind and eventually lost 2-1 to Garry Monk’s side.

However, the PNE boss was impressed with what he saw, as he explained when he sat down with iFollow PNE to preview the clash with the Robins at Deepdale this Saturday.

“I thought it was a good game,” he said. “I thought in the first half Birmingham were very good and then Bristol came on strong as the game wore on.

“I always think any match when you are going to face the opposition is worthwhile going to. It was a bit of a trip, but it was a good match to take in.

“There are six or seven teams throughout the league who have had good and bad streaks; I am sure most of them will be saying they don’t realise why – unless it coincides with injuries and suspensions – but Bristol went on an unbelievable run.

“Nine wins on the trot is excellent at any level, but they have now lost three on the bounce, including the cup, and they will be looking to put that right and get back on track, we want to continue the good form we’ve been on.

“The games against Bristol are always very tight, there is very little between the sides, so we need to make sure that we perform at our best.”

Looking at the Reds as a whole, the North End gaffer can see similarities between their approach and that of the Lilywhites, with a young and talented squad performing well.

“They try and recruit players that they believe are on the up, that are maybe not well renowned and then try and develop them, make them better and they do a good job of doing that,” he continued.

“They will be happy with their season so far. To be in contention for the Play-Offs will be one of their realistic targets from the start of the season and they are still heavily involved in it, but we have aspirations of our own. 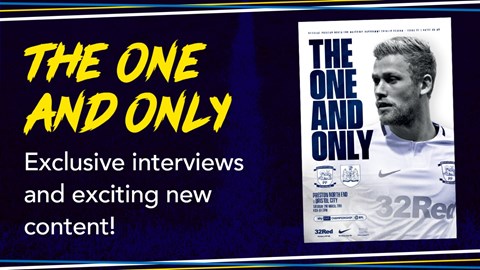 “If we can win this game, it plugs that gap a little bit and then we can see how the rest of the season pans out from here. Both teams will understand the significance of the match.”

The eight games unbeaten and the recent run of form has come with little pressure on his side, but the manager says an increase in expectancy is just ‘human nature’, but wants the fans to play their part in trying to help the run continue in PR1 this weekend.

“When it is going well everyone expects you to just rock up and win the game. I was coming back from Bristol on Tuesday night and a Wolves fan came on the radio and spoke about his disappointment that Huddersfield had beaten them – they’re sitting eighth in the Premier League!

“You have to put things into perspective. As a fan, a player or manager you always want more. You are never satisfied with what you have got, but that is human nature, I think sometimes you have to look at where you’ve come from and then where you are now and be a bit more level-headed about thinking about how you are going to get to the next stage.

“We have picked up and we are doing fine now. We have some tough games coming up and we don’t want any of that hard work to go to waste, so we would like to try and focus on winning this match and trying to make it a really exciting end to the season,” he added.