Lilywhites prospect Lewis Coulton admits he is taking everything in his stride as his rise and rise with the youth team squad continues, having started once again in the 2-0 win against Fleetwood Town. 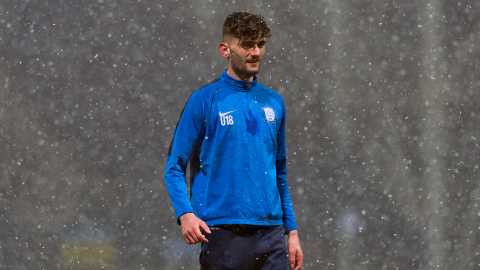 The 15-year-old has played his way into North End’s U18 side since making his first appearance of the season at the end of November, garnering enough of an impression in his two outings before Christmas to earn starting berths in the two FA Youth Cup matches this year.

North End are now out of that competition, exiting in the last match over two weeks ago at the hands of Bury, and Coulton felt it was doubly important to put that game behind them with a positive result in the first game back against Fleetwood.

“We’ve not played in a few weeks so it’s good to back to winning ways,” the young left back told PNE.Com. “The last game was obviously a big loss against Bury in the FA Youth Cup and it’s good to be back playing.

“It’s always going to be in the back of the minds [the Bury result] and it’s very important to get back to winning ways. That’s what we play football for – to be winning – and that’s what we’ve done today.

“Early on they had more of the ball but then we got the goal, we settled down and started playing how we play. From there we kicked on and got another goal in the second half.”

A tight game saw PNE defend their 1-0 lead for much of the encounter, with the youngster pleased to have seen that out for not only the win but a clean sheet as well.

“Further into the second half, they hit the bar twice in about 30 seconds. But we responded well and kept a clean sheet at the end of the day.

“It’s what us defenders and the whole team look for really [clean sheets]. The defenders especially, that’s what we strive to go out there and do; to get the clean sheet.

“If we do our job at the back, it gives the attackers their job to do and they’ve gone and done that today so it gives us the win.”

Coulton now has eight appearances for the campaign, six of which have come this calendar year.

And he has now earned a maiden international call-up with Scotland’s U16 team, eligible to represent them through his Scottish grandfather, the defender believing that his involvement with North End’s youth team has contributed to him earning that recognition.

“It’s brilliant and I’m chuffed with that,” he added, speaking of his international involvement. “I think playing for the youth team is how I’ve been recognised and I’m looking forward to that now.

“Obviously it’s been challenging and it’s different to playing for the U16s, but I think I’ve took it [the chance] well and I just look to keep getting in and around the youth team as much as I can.