Declan Rudd believed the point Preston North End took from Nottingham Forest’s visit to Deepdale was one the team could be pleased with given the gruelling week they had endured beforehand. 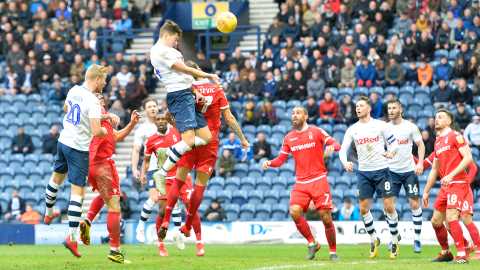 Having earned convincing wins away at Bolton Wanderers the previous Saturday and against Norwich City in PR1 in midweek, Martin O’Neill’s Forest side provided a different test for the Lilywhites on this occasion, the two teams locked in a close encounter which ended as a stalemate.

With Alex Neil having named the same starting line-up for all three outings, though, the 28-year-old goalkeeper admitted to iFollow PNE post-match that fatigue had played its part in a much tighter game this time around and with that in mind, he said this point could be deemed a valuable one.

“I think going into the game, there was a lot of fatigue in the team and it’s been a tough week of games,” said the in-form shot-stopper. “I think it was a hard decision for the gaffer, because we’ve been playing so well, to make a change [to the line-up].

“He stuck with the lads and we were all probably a little bit tired but we dug in and come away with a clean sheet and a vital point. It’s not all down in the dumps today, it’s a good point to take.

“I think [there were] tired bodies, but most of all there were some tired minds. I think that’s sometimes harder to overcome than a tired body because your mind just isn’t thinking as quickly as it would if you were fresh.

“Wednesday [the win over Norwich] took a lot out of everyone, it was a really tough game playing against top of league and emotions were high with everyone. It does take a lot out of you and to come back out here today and to get a point and a clean sheet is good in my eyes.”

The Lilywhites’ No.1 made a couple of important stops to preserve his clean sheet and ultimately help the team to a point, the goalkeeper only focused on the latter of those takeaways from the game with attentions now turning to next weekend’s trip to take on Millwall.

Dec is hoping the week ahead without a midweek fixture can help the team to prepare well for that game as he and his team-mates look to stretch what is now a seven-game unbeaten run.

“A clean sheet is welcome in any game and the fact that we won the last two and I didn’t keep a clean sheet, but drew today and I kept a clean sheet, is good enough for me. As long as we’re climbing that table and getting the results, that’s all that matters.

“You look on it after the game on a personal view and to keep a clean sheet, it just sort of tops it off for the goalkeeper and the defence and it gives you that extra incentive to try and go again and keep it shut in the next game.

“It’s nice to have a Saturday [to] Saturday week now where we can get our recovery in for the next two days, get some good training in during the week and get ourselves ready for a big battle as we know it is at The Den every time we go there; it’s never an easy game. We need to get ourselves right, we need to freshen up and we need to make sure we continue this form.”