The Lilywhites controlled the play for much of the contest, edging the possession against Frank Lampard’s Rams and outshooting them three times over, Alex Neil’s men having 22 efforts at goal to the visitors’ as the sides played out a goalless draw. 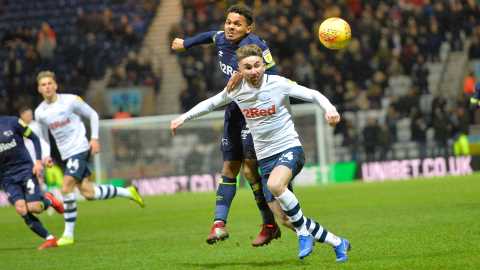 Just three of those were on target for PNE, though, while Derby failed to test Declan Rudd at all throughout the game, Maguire believing the home side to be the dominant outfit and the more worthy of the points in the Friday night encounter.

“Personally, I thought we deserved more from the game,” the Republic of Ireland international told iFollow PNE post-match. “I thought throughout the game, maybe apart from 10-15 minutes towards the end of the first half, I thought for probably 75-80 minutes we were much the better team.

“There was about 20 minutes in the second half where we could’ve grabbed two or three goals, but, look, it was another strong performance from the team.

“We had a tough period around Christmas but you can see now that the new signings, the players coming back from injury, we’re all starting to gel together as a team and hopefully now the only way is up and we can have a strong end to the season.

“I didn’t even realise that [the shooting statistics]. [Derby’s] were shots from long range, 25 to 30 yards out, so it shows how strong our spine of the team is I suppose.

“We kind of defend from the front but I thought Davo [Ben Davies] and Jordy [Jordan Storey] were brilliant again today. Davo’s only 23 and Jordan is only 21 and they look like they’re two experienced pros out there. But it’s another point on the board and hopefully now we can keep that going.”

On an individual note, 24-year-old Maguire was pleased to get more minutes under his belt and on the goalscoring front, he has next weekend’s trip to Bolton Wanderers firmly in his sights. 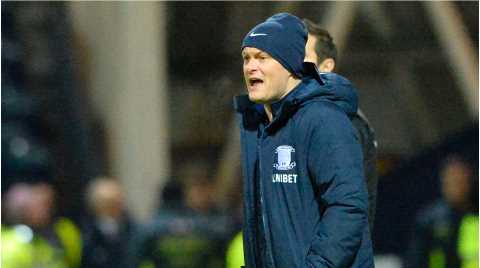 The Irishman scored two on his return from injury in the same fixture last term and is hoping he can have a similar impact this time around, that the first of a three-game week in the Championship, with tests against Norwich City and Nottingham Forest then to follow at Deepdale.

“I thought tonight was up there with one of my strongest performances of the season,” added North End’s No.24. “I’m not too pushed at the moment if I’m not scoring goals, I think that will come the more match fit I get.

“I think I’m still a couple games [away from being] back to where I was last season; that will come with more minutes. I think it was only my second 90 minutes of the season and, strangely enough, it was my first start at Deepdale this season.

“I came back from a serious injury [last season against Bolton] scoring two goals, so I’m hoping next week will hopefully be my first couple of goals of the season. It would be a nice way to get it and obviously taking what we did last year at Bolton. Now it’s just about regrouping, recovering and having a good week’s training towards an important week where we have three big games.

“We have eight days now towards our next game which is a massive game obviously, Bolton away and we have three games in a week and that can tell our season in the space of those three games. You know every game in the Championship is going to be tough and I felt that Derby are supposed to be one of the better teams in the Championship and we made them look mediocre.”