We’re going right back in time, over 60 years, for our latest look back to a memorable match between the Lilywhites and our next opponents.

6 February 2019
It was a Saturday in April 1958, as North End made the short trip across Lancashire to face Bolton Wanderers at Burnden Park, with the visitors looking for revenge against their local rivals, who had knocked them out of the FA Cup with a convincing 3-0 win at Deepdale a couple of months earlier.
But this time it was an afternoon to remember for PNE, who thrashed their hosts, moving onto a total of 57 points with a 4-0 win, a club record total for the league championship – just one short of their record for either of the top two divisions.
The Wanderers had the better of the opening exchanges, as their bustling, fast-moving style put North End on the defensive. But the opportunities, notably to Parry and Stevens were wasted by wild shooting.
As the first half wore on, Lofthouse headed against the bar and Fred Else produced two outstanding saves from Stevens and Birch, but it was North End who took the lead against the run of play.

Finney was put through by a great pass from strike-partner Tommy Thompson, only to be pushed in the back by Banks. The referee had no hesitation in pointing for a penalty and Finney himself took the spot kick, hitting it forcibly past a static Eddie Hopkinson. 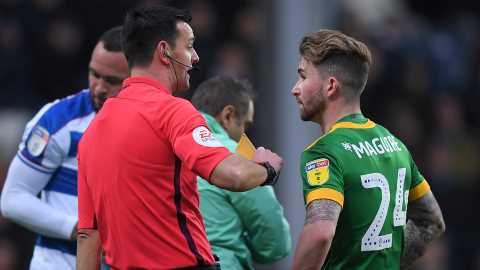 7 February 2019
The Lilywhites doubled their lead directly after the resumption, when Mayers redeemed a poor first half display by going through on a good run with Bolton appealing for offside. Dennis Hatsell, who was alert and enterprising throughout, took advantage of this to score.
The return of Finney, Tommy Docherty and Baxter made a big difference to the effectiveness of North End and on the hour mark, Finney, who had slipped into the middle, prompted Hatsell with a perfect through pass and the striker beat Hopkinson with a shot which the goalkeeper could only help into the net.
The home side then had a couple of narrow escapes, with both Thompson and Finney beating the Wanderers’ keeper, but their shots came back into Hopkinson’s arms off the woodwork!
With time running out, Bolton again fell victim to their offside tactic, with Thompson scoring his 33rd goal of the season for PNE manager Cliff Britton’s side, rounding off the 4-0 triumph.
Bolton Wanderers line-up: Hopkinson, Hartle, Banks, Stanley, Higgins, Edwards, Birch, Stevens, Lofthouse, Parry, Holden.
PNE line-up: Else, Cunningham, Walton, Docherty, Dunn, O’Farrell, Mayers, Thompson, Hatsell, Baxter, Finney.
Attendance: 24,067