Bolton Wanderers manager Phil Parkinson says this is a ‘huge’ week for his team and he is aiming to kick it off with three points against Preston North End.

6 February 2019
Speaking to iFollow BWFC ahead of the clash at the University of Bolton Stadium, the Trotters boss was looking for his side to bring all the elements of their positive displays together in order to get a result.
He said: “It's a huge week for us. We have to make sure we close that gap on the teams above us, starting with [the game against PNE].
“It is an opportunity to do that. We are still alive and kicking, some of the performances have been good, but we have to add all the ingredients into the pot together to get a result and that has to be the aim.”
And he feels his side can take positivity from their performance in the reverse fixture back in September: “It's a great game to look forward to,” he continued.

“It was a terrific match at Deepdale earlier in the season. We were 2-0 down early in the game, but came back and probably should have gone on to win the game.

7 February 2019
“I am sure this game will have equal entertainment value.
“Derby games are always that bit special and the lads and the staff will be right bang up for it and the supporters have to come in and play their part as well.
“There is going to be a big following from Preston and when we have had that before, our supporters have done their very best to drown out the opposition fans and we have to do that and create a positive environment for our players to flourish.
“It is a huge game for both teams and it gives us an opportunity to go into what is a very important week with some points in the bag.” 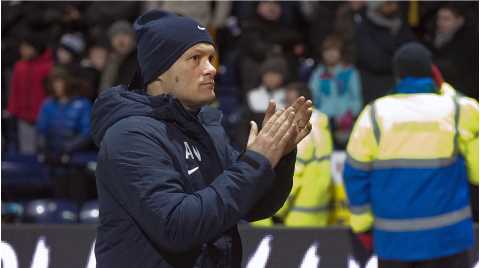 Alex Neil Looking For A Repeat Of Last Season

7 February 2019
And he says he knows what to expect from the Lilywhites: “They play 4-2-3-1, or 4-3-3; they change it within games at times.
“The midfield trio to Pearson, Gallagher and Browne which has stood them in good stead for the last few years is still at the heart of their team,” he added.