For the fourth time this season we have experienced match official Geoff Eltringham taking charge of the Lilywhites as we take on league leaders Norwich City.

11 February 2019
The referee last took charge of one of our games for the final game of 2018, when we took a point from a fine performance against Aston Villa.
Prior to that he was referee when the Lilywhites travelled to Ashton Gate and defeated Lee Johnson’s Bristol City in October. He was also in charge of North End’s trip to Elland Road back in September, having also officiated five games for Alex Neil’s side in the 2017/18 season.
Last year, having taken charge our early season game at Derby County, Geoff also took charge of the Boxing Day trip to Barnsley, our January win at Nottingham Forest, March’s victory over Bristol City at Deepdale – our last clash with the Robins - and finally our goalless draw with Norwich City in mid-April. 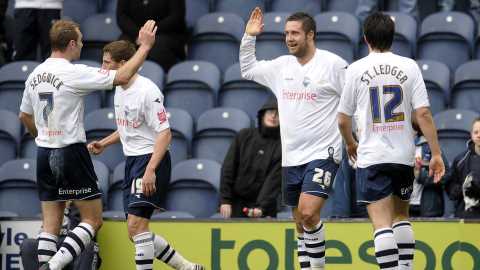 11 February 2019
The year prior to that he took charge of three PNE games, including the 2-0 home win over Peterborough United in March. Back in the 2013/14 campaign he also took charge of North End twice, both of those at Deepdale - the 1-1 draw with Tranmere Rovers back in November 2013 and then the goalless draw with Sheffield United in March.
The County Durham official is an experienced referee who had taken charge of North End a number of other times in the past including the very first game after the departure of Graham Westley, when John Dreyer took the team against an in-form Bournemouth side and ran out 2-0 winners.
He also looked after a thriller back in 2010, when North End overcame Crystal Palace 4-3 at Deepdale.
For the game, the referee will be assisted by Nick Hopton and Matthew McGrath, whilst fellow select group two official Oliver Langford will act as the fourth official.
Geoff has so far taken charge of 26 games this season, with 90 cautions and four red cards issued, his last game being Saturday’s local derby between Sol Campbell’s Macclesfield Town and Crewe Alexandra, which ended in a thrilling 3-3 draw.