Preston North End attacker Tom Barkhuizen feels that Wednesday night’s win over then league leaders Norwich City was the best display the Lilywhites have put in since he joined the club in January 2017.

14 February 2019
The flying winger/frontman felt that it was an all-round performance and something that was borne out of the belief that the squad have had in the quality within the dressing room.
Speaking to iFollow PNE to look ahead to the weekend’s clash with Martin O’Neill’s Nottingham Forest, he started by reflecting on the crushing of the Canaries and thinks it could be a springboard for more of the same.
“It is probably the best we have played since I have been here,” said the No.29. “Everything is just coming together as a team, as a unit and individually everyone has really stepped it up over the last five or six games and we are showing the league what we can do.
“It is okay knowing in the dressing room what we are capable of, but to take that out onto the pitch against the opposition is difficult. We had a really tough period over Christmas and have had tough periods throughout the season – which is why we are, where we are – but we strengthened really well in January, brought in some good players, managed to get some key players back and now we are showing what we can do.

“I think Wednesday’s result was important for belief, both inside and outside the dressing room. It is alright knowing we can beat anyone in this league, but to beat teams lower down the table – with no disrespect to them – people don’t pay attention. But if you bring top of the table to you home ground, when they are flying, and turn them over, is a massive result and confidence now will be flying even higher.

14 February 2019
“It shows the confidence that we’ve got, that we were saying six or eight weeks ago that we could still push towards the top of the table. I train with these players every day and every interview we all do is the same – we can do it; we can beat anyone.
“The amount of quality we have in the team is ridiculous and to be 13th in the league is massively disappointing for us, but we have had to overcome some serious problems this year and to be where we are, is probably a good thing at this moment. We are going under the radar a little bit and slowly creeping up on the top eight and with 14 games still to go, why not dream of getting into the top six?
“If we put a really good run together, like we did earlier in the season, there’s no reason why we can’t get there.”
The visit of Forest is the team’s third game in a week and the 25-year-old feels it is a game where the extra one per cent can be vital.
“This weekend’s game could be the hardest of the three this week,” continued the former Morecambe man. “It is about managing expectation. You aren’t going to go into every game and play like we did on Wednesday – football doesn’t work like that – so we just need to keep our feet on the ground.

“[Nottingham Forest] will come here having got a good result on Tuesday; had an extra day’s recovery and with a new manager in place. 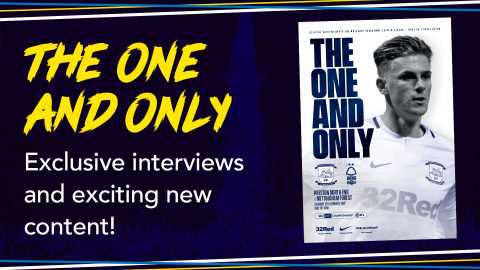 14 February 2019
“They will be full of confidence, wanting to prove a point and show what they can do. If we can play as close to as well as we did on Wednesday, then we can beat them.
“It is very difficult to go into Saturday-Wednesday-Saturday and play at 100 per cent in every single game. It all depends on what the manager does with his team selection, but the majority of the lads who played the last game are probably likely to play again, which is tough.
“You have to do the hard yards; do that extra one per cent to make that last-ditch tackle or get on the end of a cross. Those can be the match-winning moments and we have to try and do that and hopefully win the game.”