The youth team's FA Youth Cup fifth round tie against Bury has been confirmed for Friday 8th February, with a 7pm kick-off at Deepdale. 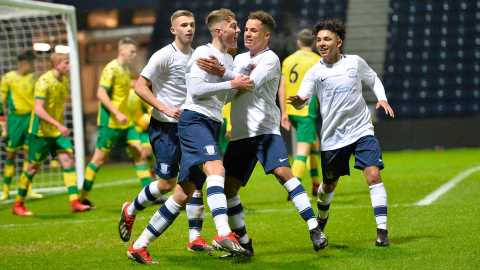 Preston North End U18 vs Norwich City U18 Match Report

It will be the third time North End's youngsters have played at Deepdale this season, following victories over higher category clubs in Charlton Athletic and most recently Norwich City in the earlier rounds of the competition.

Nick Harrison's team will now have the chance to face a fellow Category Three club, with former PNE defender Ryan Kidd set to bring his Bury side to Deepdale.

North End and the Shakers play in the same league and have already gone head to head three times this season, all three ending in draws after 90 minutes, with the Greater Manchester side coming out on top once after winning on penalties in the Youth Alliance Cup.

Tickets will again be priced at £4 for adults, £2 for concessions (over 65s and under 18s) and under 11s can gain entry without charge when attending with an adult. Season ticket holders of both PNE and Bury can also watch the action for free.

As a result, the youth team's home fixture against Walsall in the EFL North West Youth Alliance league, originally scheduled for Saturday 9th February, has been rearranged for a 1pm kick-off on Tuesday 12th March.

The winner of the tie on Friday will face Liverpool or Wigan Athletic at home in the quarter-finals of the competition.