Louis Potts, Jerome Jolly and Tyrhys Dolan found the net to help the youth team make a winning start to 2019 with a 3-1 success over Accrington Stanley.

Louis Potts, Jerome Jolly and @TyrhysDolan10 were on the scoresheet for North End. 👏#pnefc pic.twitter.com/73wYMGqq61

Having gone behind to Johnjo Morris’ early strike, Potts equalised immediately before his team-mates scored in quick succession just after the half hour mark, allowing North End to finish the contest well and truly in control.

Jack Baxter and Ethan Walker returned to the starting line-up, having been heavily involved in the first team picture in recent weeks. Dolan, James Cottam and Lewis Coulton made up five changes from the last game against Port Vale, three weeks previously. 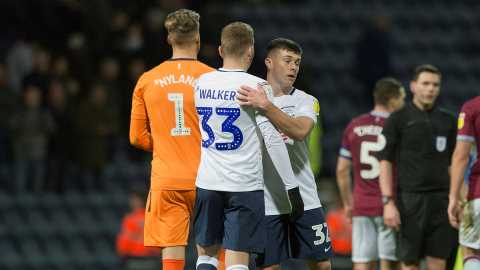 But PNE started off the pace, as Accrington – officially the home side for this fixture, despite playing at North End’s usual home venue of UCLan Sports Arena – took a fourth minute lead.

North End attempted to clear a cross in from the left but when that deflected back to Morris, lurking just inside the box, he arrowed a fierce left-footed strike into the bottom right corner.

However, the Lilywhites responded immediately as Baxter’s raking pass allowed Walker to race to the left byline and cross invitingly for Potts, who converted for a fifth-minute equaliser.

With the slow start firmly behind them, PNE soon began to dominate this all-Lancashire affair, Potts proving a bright spark up front, misdirecting a header from Lewis Simmons’ cross, before picking up Joe Nolan’s pass only to see his near post effort saved by Stanley goalkeeper, Toby Savin.

Walker shot straight at goal from 20 yards following some patient build-up and he then played Jolly into the box, who laid it off for Potts to have another low attempt blocked by Savin.

But North End’s second did arrive in the 32nd minute. Walker claimed his second assist of the day by threading a wonderful pass through for Jolly, who took a touch wide before finishing coolly across goal and into the bottom right corner.

And no sooner after they had taken the lead, the Lilywhites had another. It was a 34th-minute effort of Dolan’s own making, his alertness around the box rewarded as he stole possession following a short goal kick and finished powerfully beyond Savin.

Potts and Savin continued something of an individual duel, the Accrington stopper again managing to deny the PNE man after he’d taken on Simmons’ magnificent ball over the defence. 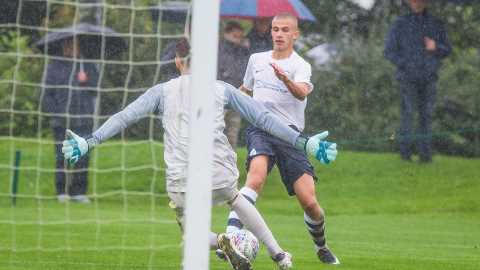 The Lilywhites continued in the same vein after the break, Baxter having a thunderous effort blocked and Walker curling a first-time effort over within minutes of the restart, Dolan also going close when he nodded wide the latter’s wide left free-kick.

Potts had the beating of Savin just before the hour but his shot was cleared off the line, although the opposition ‘keeper did save well from Dolan and Walker soon after.

Dolan almost capitalised on another loose ball at the back but Savin again saved his shot, and a heroic block denied substitute Josh Pollard following in.

North End might have extended their lead late on when Savin dived to save a Lincoln McFayden header and Baxter’s curler just cleared the bar, but their victory had never looked in doubt as they kicked off 2019 with three points.

Academy manager Nick Harrison was satisfied with all aspects of his side’s display.

“Overall, I’m really pleased; pleased with the performance and the result,” Nick told PNE.Com. “After conceding in the first three or four minutes, to get the equaliser straightaway was a great reaction.

“We had lots of chances in the game, we saw lots of the ball which was because of the way Accrington played; they sat off us and allowed us to do that. It’s difficult to break down when teams get ten or eleven men behind the ball.

“We did that well enough in the first half, it could’ve been better in the second half in terms of that final decision or quality in the box, but it’s pleasing to see the boys try to play the right way and try to get into good positions.

“It would’ve been brilliant to win it by more, but ultimately for the boys, they’ve won the game which they should be pleased with and it’s three points.”

Harrison also commended the attitude of Baxter and Walker, the duo back in the youth team’s starting line-up for the first time in over a month.

“We saw in this game, for Ethan and Jack, it’s another game of football to come up against an opposition that are trying to stop them and they’ve got to work out how to try do that by creating chances and scoring goals.

“I thought both of them showed a great attitude to come back from the first team environment and play in an U18 game. It’s good to see what they’ve achieved and good to have them back, but hopefully they will get more experiences like that as the season goes on.”

The youth team will come up against Accrington Stanley again in midweek for the Lancashire FA Professional Youth Cup semi-final and Harrison hopes his players can put in a similar display.