A youthful North End team took a battling point away at a strong Bury side in the North West Youth Alliance league, with a stunning 90th-minute equaliser all that denied them the three points.

All four goals came in the second half, Joe Adams opening the scoring just before the hour, but Josh Pollard and Jacob Holland-Wilkinson found the net inside the following ten minutes to turn the game on its head. However, Saul Shotton picked out the top corner from distance in the dying moments, making it all square at the final whistle.

🎥 | Two excellent finishes from @josh_pollard8 and @Jacobholwill14 to earn #PNEU18 a point away at Bury in North West Youth Alliance league action!

Congratulations to Jacob on scoring his first in competitive action for the youth team. 👏#pnefc pic.twitter.com/kvIefpdCDd

Pollard was the only man to keep his spot from the midweek FA Youth Cup victory against Norwich City, with the youth team set to welcome the Shakers back to Deepdale in their next match a week on Friday in the next round of that competition. With numerous scholars rested, five of the eight schoolboys who started against Shrewsbury Town last weekend returned to the starting line-up.

They started well, although it was Bury who would see more of the ball for large parts of the contest. Femi Seriki was the outlet bursting forwards from right back early on, Levi Lewis and Joe Blanchard intervening well against him in the box in quick succession.

James Cottam read Jack Hatton’s low cross well to collect ahead of Aaron Brown, meanwhile Holland-Wilkinson miskicked a shot from the left side of the box. 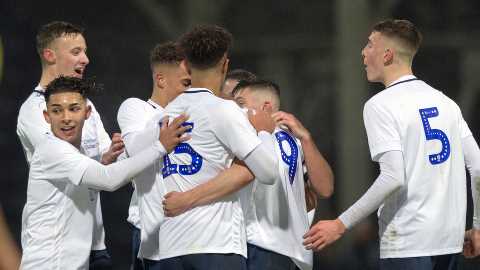 The first real chance of the game came midway through the half, Bury’s Callum Hulme running in behind to meet Hatton’s through ball down the left, the midfielder unable to wrap his foot around the ball quite enough, his shot rebounding off the outside of the post.

Hulme had another effort blocked from a free-kick, the contest very much a cagey one until the final moments of the half, Holland-Wilkinson’s flick giving Darren Brannigan time and space two minutes from half-time but he placed wide of the bottom corner from ten yards.

Callum Jones headed over unopposed from Adams’ corner and Holland-Wilkinson dragged another shot wide for the Lilywhites, these frantic final moments providing a more accurate picture of how the second half would pan out.

The hosts started quicker after the interval, Adams curling wide from distance having cut inside from the left, a cross from that side moments later begging for a touch at the back post, but Cottam was able to see it wide.

Cottam saved well at his near post to prevent an own goal, Tyler Williams also on hand minutes later to win back possession with a superb tackle in the box.

But Bury’s pressure eventually told as they took a 57th minute lead. From a throw in down the right side, Adams beat one man and shifted onto his left foot inside the box, where he curled across goal and into the far-right corner for a stylish opener.

The visitors responded brilliantly, though, as after Cottam had saved Brown’s near post effort, the Lilywhites piled forward in the following quarter of an hour.

They equalised pretty quickly, courtesy of Pollard in the 61st minute. Cottam’s kick out from the back was held up by Brannigan and he shifted it out to Bennett on the right. He played an expert pass across goal and Pollard finished beautifully into the top corner from the edge of the box.

Holland-Wilkinson was denied by Williams minutes later and Joe Nolan’s pass down the line set up Brannigan, the PNE forward also seeing his shot saved at the near post by Bury’s ‘keeper.

But the U16 forward did find the target to give the Lilywhites a 67th-minute advantage. Jolly whipped in a wonderful cross the left and Holland-Wilkinson headed past Williams and into the far corner – his first goal for the youth team.

Little over five minutes later and the tricky Hulme drew a magnificent long range save from Cottam, but despite Bury’s possession, the visitors gave away little in the way of clear chances.

Indeed, something special was required to level matters and Shotton was the man to provide it – he teed himself up 20 yards out in the final minute and found the top left corner with a brilliant strike.

Either side could have won in stoppage time, Brannigan going closest for PNE but the sides would have to settle for a draw – the third Bury and North End have played out in normal time this term.