With the North End squad starting to all get back towards fitness, along with the new January transfer additions, manager Alex Neil will have some difficult selection decisions soon, and Alan Browne says that this is an opportunity for the Lilywhites to show what they are really capable of.

The Irish international spoke to iFollow PNE ahead of the visit of Swansea City to Deepdale this weekend and admitted that he felt the team had underperformed so far this season, but the added competition will help the team get back towards their best.
“At this stage of the season there is not much expected from us, so there probably isn’t too much pressure on us,” said the No.8. “So, to get everyone back, we can then really go and show everyone what we are capable of, because I don’t think we have done that so far this season.
“We went on a good run, without a defeat, but I still think there was a lot more to come and I am sure the boys do as well. To have everyone back, along with the new signings, we will look to kick on and do as well as we possibly can and see where that takes us. A run has to start somewhere and why not this weekend?
“We probably deserved more from our game down at Swansea. The game probably came too early for us. We weren’t too familiar with them and probably showed them too much respect, because they had just come down.

“This weekend though, without too much pressure, we can go and play with freedom, play our own game and I am sure if we do that and stick to what the gaffer says, we will be more than fine.” 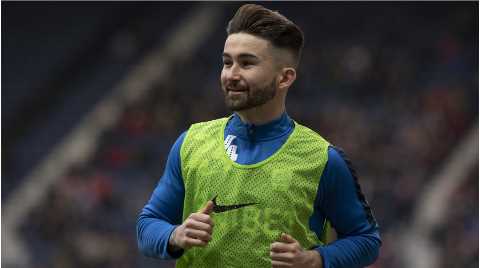 8 January 2019
The former Cork City man returned last weekend to complete 45 minutes in the Emirates FA Cup third round clash in PR1 and he feels that the easing of the injury crisis that beset the festive fixtures will allow the side the chance to ‘kick on’.
“Given the number of injuries we have and put in Ben’s suspension as well, we were down to our bar minimum,” he continued. “To be fair, the lads did well and got a good point against Villa and I thought we would kick on from there.
“It was a huge disappointment to come away with nothing from Rotherham, the boys deserved a lot more – that’s the sort of thing that happens all the time in this league, you don’t get what you deserve – so that was disappointing and to go out of the cup as well was disappointing.
“They were a good side and came and put it up to us, but we should be more than capable of dealing with Doncaster, especially at home, so that was probably the biggest disappointment of the lot.

“We have got numbers back now though, people are coming back from injury slowly and if you add the new signings and Ben coming back from suspension, it is all looking a lot better now and hopefully we can regroup and kick on for the rest of the season.

“I was happy to get back out on the pitch. I probably played a bit more than was planned, but I felt good and I was happy to get 45 under my belt, giving me confidence I can get through the game and knowing that I am fit again and I will take that into this weekend.”
The return to fitness of a number of players and the new signings also add an extra sharpness to training and Browney believes this will aid the team when it comes to matchday.
“[Training this week] will be a good chance for me to see the new lads, because I haven’t had a lot of a chance to see them, with being injured, but the lads have said they have settled in well and are good around the changing room already. It will be good for the gaffer as well to have a full squad out there.
“I am not sure when the last time we had a full squad out there!

“I know there is still a few to come back, but we were down to our bare minimum and to have the numbers back will give the gaffer a headache for the remaining games. What you want, and I am sure the gaffer wants, is everyone out there on the training pitch fighting for a place.

“The new boys coming in will want to play, but the boys who have been playing already want to too, so it adds to that competitiveness in training; it keeps you on your toes, looking over your shoulder and it adds to that intensity in training and will take the level up another notch.
“At the moment we are thinking we have our squad back together, but if you think there is still Ben, Louis, Callum, Josh and Billy all still to come back – who are all top quality players who would slip right into any team – to still have them to come back is even more threatening for competition for places, it is another headache for the gaffer to have and it is all good for our strength in depth, which will be good for us,” he added.